View from the highway approaching Hoover Dam...taken from the moving car, downloaded into my iphoto program on my mac computer and cropped. Not bad huh???
I have a confession to make....I take pictures from the car while it is moving!!! I know! It is unbelievable but it seems that sometimes stopping just is not possible. I will take pictures through the windshield, the sun roof or out the drivers side of the car as my husband drives leaned back as far as he can. Surprisingly, the pictures will actual turn out very good. I have a small Sony Cyber-shot 7.2 mega pixel camera that I have used for several year. This little camera has been a winner for me. I suppose I could learn to use a camera with a telephoto lens and often wish I had one but this is very simple and the results work for what I do...like taking pictures from a moving car.

For example when we went over Boulder Dam on our way to Las Vegas on Highway 93 this last Wednesday, we were following another car in tandem, moving from lane to lane. We wanted to stay together as traffic picked up. We were late pulling into Las Vegas, NV because we had golfed the Wickenburg Country Club in Wickenburg, AZ earlier in the day. Rush hour was approaching and we needed to keep moving. As the sun was getting low into the sky, colors appeared on the distant mountains that took our breath away. 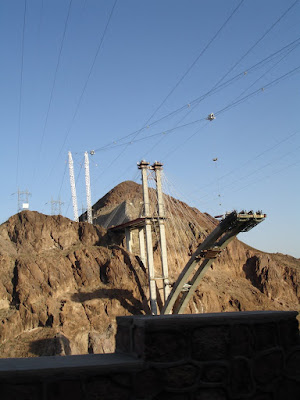 A new bridge is being built as a part of the Hoover Dam Bypass Project. The project will allow truck traffic and those not interested in stopping at the dam for pictures to bypass the bottle neck. But, until that is completed in June of 2010, big rigs are not allowed and commercial traffic is routed on a different highway into Las Vegas. The road approaching the dam is very crooked and slows traffic to a standstill. Everyone that needs that route for commercial purposes will welcome the change.

So, as I took pictures of the dam, the looming construction on the bridge that will span the Colorado River canyon and the smokey hill in the distance, my husband drove at the speed limit. These are the images I captured....evidence that my confession is, in fact, true!!!

Have a wonderful week!
b

Bridge spanning the Colorado River looms over Hoover Dam. The dam built in the 1930's began offering tours in 1937.

Lake Mead, the lake that is created by Hoover Dam, is a resort destination for many. House boats are available for rent. 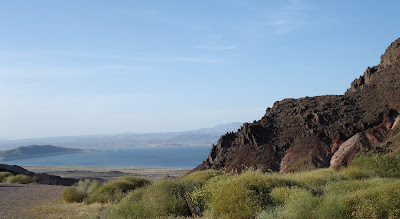