My husband and I just returned from a road trip from Portland, Oregon via the Columbia Gorge to Great Falls, Montana and back again.  I think this may have been the best summer vacation we have ever taken.  We were only gone one week and 4 nights were spent in Great Falls golfing and visiting with "snow bird" friends.  How this translates into your plans is up to you.  I think those 4 nights could be used as longer stops along the way.  Here is the way it went.

Day 1
We left Portland early in the morning and traveled west along I-84.  We decided to exit at Boardman onto Hwy 730 (Columbia River Highway) so we could stop at a fruit stand and buy water melons and Walla Walla sweet unions to take to our hosts.  The seller at the fruit stand challenged my husband to guess the weight of the water melon we were buying to get a free melon.  Silly woman...we delivered the free melon when we arrived in Great Falls.

Note:  We then turned onto I-82/395.  This interstate turns into I-90 near Spokane and we stayed on I-90 until we left Missoula where we took Montana 200 into Great Falls. 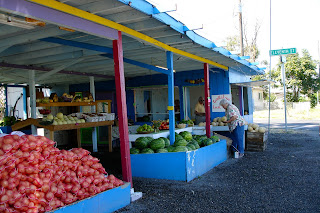 We then took I-82 & I-90 on to through Spokane into Coeur D Alene where we spent that night.  The drive took us from the verdant green of the Columbia Gorge through the north central Oregon high dessert into the wheat fields of Washington near Ritzville back into the timber near Spokane and on to Coeur D Alene Lake and all it offers.

The Coeur d'Alene area is surrounded by dozens of lakes left behind by the glaciers of the ice age. There are more than 55 lakes within easy driving distance of Coeur d'Alene, but none more scenic and full of activities than Lake Coeur d'Alene itself. (Coeur d' Alene Visitors Bureau)

I think you can see how this day could be turned into much more.  We spent a long time on the road that day.  We could have stopped much sooner if we were not on a quest to arrive in Montana...sigh!

Day 2
We were up very early again the next morning...my husband just could not wait to get to Montana.  Since I was not awake and certainly not hungry I suggested we wait until we get to Wallace for breakfast.  Kellogg and Wallace are two very old mining "camps" that lay in a narrow gorge leading away from the lake.  They have somehow managed to maintain the feeling that the silver rush is still in full swing.  Some say they never gave up the mining dream.

Wallace sits directly underneath the interstate...strange but true.  A small creek runs near town...Lead Creek I think. One of their big attractions is a Bordello Museum.  I need to see that one someday soon.

We had breakfast at the Club 1313.  This is one stop I would not have missed for anything.  Honestly, I am not a good tourist because I don't ever want to read about where I am going.  I know we must miss things but there is something so special about finding a treasure all on your own.  That is what Club 1313 was...a treasure I FOUND as though no one else knew about it.

I stood at the bar with my foot on the brass rail and ate breakfast staring at the buffalo head hung on the wall above what may have been a giant hornets nest inside a glass box.  It was unique to say the least.

Idaho has a law that requires bar owners to conceal their liquor from 2 am until 10:00 am.  In this bar the back bar was covered with sheets of stained and lacquered plywood.  The waitress said they would remove the boards at 10:00 am.

We traveled through the beautiful Bitterroot Mountains across the continental divide and arrived in Great Fall at about 4:00 pm.

Day 3-5
We golfed the next day at the Meadowlark Country Club where our friends are members.  This old club is home to several generations of golfers.  It truly is a jewel in the golfing world.

The members we played with said that the old cars that line the banks of the Missouri River were the very cars that come of the grandparents of members drove long years ago.  The Missouri runs by in a lazy fashion that belies its depth and the furious damage it did to Great Falls earlier this spring.

My husband enjoyed a visit to the Lewis and Clark Interpretive Center just south of town.  The center is set very near to one of the dams that span the Missouri.  There is one at at the top of each of the three falls.

Day 5
On day five we set out for home.  We traveled all the way to Lewiston, Idaho that day.  We traveled through the Bitterroot Mountains again but by a more southerly route.  This is a designated wilderness area and no dams are allowed on the Lolo River.  The history of the area is told by Lewis and Clark in Lewis's journals.  They related killing a colt because the passage was so difficult and game was scarce:

This Indian trail across the Bitterroot Mountains was used by western indians to reach the eastern plains buffalo hunting grounds for centuries before Lewis and Clark arrived. The expedition found the trail through the cold, high ground difficult, rocky and steep. One of their horses fell 300 feet down a mountainside. As the Indians had told them, there was no game. They were forced to eat candles, bear oil, horsemeat, and packaged "portable" soup they'd brought from the east.  (State of Montana website) 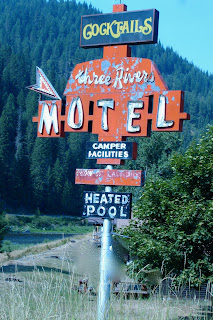 My favorite picture from that day is of a resort near the west end of the Lolo River very near where it flows into the Clearwater River.  The resort had seen better days but is still in operation with a small store, cabins and a restaurant.  It was the last resort going east into the gorge I think.  The end of the line as it were.  Oh by the way, the ice cream bars are wonderful after many hours of no hope for food or water...now I know what Lewis and Clark were talking about. (Link: Traveling Great Falls Montana to Portland, Oregon)

Lewiston turned out to be a treat with entertainment in the Red Lion Lounge patio and good old buffalo wings for dinner.  The beds were wonderful.  I asked for a senior room so we were treated to two queen beds.

Day 6
As we climbed out of the valley where Lewiston sits, we entered The Palouse region of Washington.  This region covers the 120 miles between Spokane and Walla Walla and is some of the most beautiful wheat and rape seed farm land anywhere.  The region is farmed for as far as the eye can see.  As we approached Walla Walla on Highway 12 the evergreen trees lay in every gully and near the homes.  This part of the regions lays very close to the Blue Mountains.  I don't know if it is this green this late in the summer every year but it is now.  I could only think of a beautiful spring day as we travels through the small communities along the route.

We did not stop in Walla Walla but I think you should.  This area is home to two colleges.  Whitman is in Walla Walla.  This lovely little liberal arts private college is premiere in colleges of it's size. It was built in honor of Marcus Whitman.  Whitman was the Methodist missionary that attempted to convert the Walla Walla tribe and were later killed because the people of that tribe believed they were being poisoned after an outbreak of measles. A visit to that historic Whitman Mission is worth your while.

Interestingly, the Mullen Road built in 1860 connected to a fort very near Great Falls.

Mullan Road was the first wagon road to cross the Rocky Mountains to the Inland of the Pacific Northwest. It was built by US Army Lieut. John Mullan between the spring of 1859 and summer 1860. It led from Fort Benton, Montana, [near Great Falls] the navigational head of the Missouri River (and once farthest inland port in the world) to Fort Walla Walla, Washington Territory, near the Columbia River. The road previewed the route approximately followed of modern-day Interstate 15 and Interstate 90 through what are now Montana, Idaho and Washington.

We had followed a some of that route on our vacation.

Walla Walla has welcomed a burgeoning winery industry and wineries dot the roads in every direction.  The old community has a hotel called The Marcus Whitman that is worth the stop in town just on it's own.  The old hotel was built in 1927 and retains that era's charm and opulence. 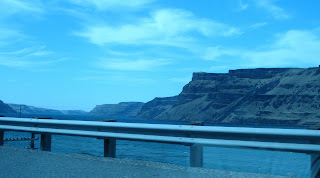 As we returned to the Columbia Gorge, the wind began to blow.  At the place where the Columbia turn northward toward Canada the wind roars like no where else.  It seems like a micro climate all it's own.  We were anxious to be home so we turned on auto pilot and rushed to our home in Hillsboro.

Thank you for traveling with Retire In Style Blog.