Chinese Spirit Rocks: Why My Amana Stove "F-4"d Me

Did you know that there are spirits living in the rocks?  At least in China.  Rocks standing in lots waiting to be claimed by lovers of rock spirits, dot the road side.  In the Forbidden City, rocks have been speaking their spirit language for many hundreds of years.  I learned a lot from the Chinese when we visited the very first time.  But, really, I did not think that I could ever wrap my mind around an inanimate object being in possession of a personality or spirit.  Boy was I wrong.  Let me tell you about it. 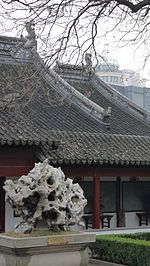 You see we really want stainless steel appliances in our kitchen because we are fickled.  Our new house has old appliances that were a part of the house when it was first built.  The stove is white, electric, down draft vented and faded. The refrigerator is also a little the worse for the wear.  The former owner had a parrot. The parrot ate the seal around the frig door. Who knew a parrot would do that! It also ate the seal around the garage door but that is another story.  Being the good and loyal all be it old appliances that they are, they still worked! We were feeling smug and secure. We could dispose of them at our convenience.  After all, they were just old stuff and who cared.  Not us.

Then the situation changed and I think our appliance spirits could smell the opportunity to make us pay for our disloyalty.  They were waiting to see what would happen next.

First the warranty on our house expired the end of July. We had been calling that warranty company for a year to get old appliances, leaking pipes and the furnace fixed for a minimal fee.  It was very nice and a money saving benefit.  But all good things must come to an end.  The appliances are getting close to having us where they want us.

Then there was the ad in the newspaper that caught my husband's eye...stainless steel gas stove with convection oven on sale.  We discussed and mulled it over.  We even sat in our living room adjacent the kitchen and talked about a shiny new stove with our children. The white stove was only 5' feet away. It was as though the white stove knew it was going away. Then we remembered that the old stove was down draft and the one on sale was not. But the damage had been done. Our stove knows it's days are numbered even if it goes on working just fine. We have said out loud that we do not want white appliances anymore.

In the mean time our little toaster oven quit and so we ventured out to buy a new one. The one we chose was stainless steel so we left it out on the counter. Stainless steel just looks so sleek and pretty! We admired it's beauty and stook back looking at it in awe...leaning against the old stove.

That was when the stove got it's feelings really hurt. When I tried to turn the oven the next night, the digital read out said simply "F-4".  No matter what we did it just "F-4"ed us all over the place.  The oven had mysteriously decided not to work...period. No siree! 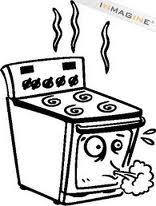 Now I am wondering; does that stove know stuff?  I have to believe that it may have conversations during the middle of the night with the refrigerator and make executive decisions about the fate of my next dinner party or my grand children's cookies. In fact, it could be that there are spirits residing inside the cool white boxes. They do not like being displaced or pushed aside. They like things just the way they are. Much like those rocks in China.