Have You Noticed That the Sky Is Bluer?

If you believe that global warming is a myth, do you feel free to pollute more? I wonder.

What were you thinking and doing before "global warming" became a catchphrase for political purposes? Did you even pay any attention to what was going on and how things looked?

We drove big cars, burned coal in our stoves and furnaces, took no notice of what industry was doing to our rivers and lakes. We scatters papers on the sides of roadways and in our National Park. Humans were wasting our earth resources at the speed of light. Back when we thought our earth was so big that nothing we did could harm it, did we even think about what we were doing?

That is how pollution crept up on us and began to kill our planet one small drop at a time. The world went into denial because doing anything would be very hard. The sky was really not blue anymore was it?

The other day I took a good look around. The sky was blue...it was amazing how pure the air looked and felt. We took a road trip yesterday and our roadways are not littered with trash. It is so much better than it was back in 1970 when the EPA was created by President Nixon. What happened? What did we do?

I think it was all the little things and some big things that made the difference. In my world that is what I saw.

For example, back in 2010 we were selling a RV because the price of gas had gone to above $3.00. In trade for that RV, we took a trailer house and a pick-up that was almost 30 years old. In the end we did not get that vehicle because the owner realized that he could get a lot of money from the government to simply not drive it ever again. It was a huge polluter. It used enormous amounts of gas so it needed to be taken off the road. It needed to go away. Could that be what happened; people quit driving old polluting cars?

In Portland we have a lot of rain so that does clean the air at the cost of the land underneath of the rain. Even here we could cut the pollution with a knife at some times during the year.
So people here in Oregon have quit using fireplaces with dampers that emitted smoke all day long in the winter. That was a problem here in Oregon. We buy cars that are either more efficient or are running partly on gas and partly on batteries. Industries are doing their part too. Coal is not a go to source for driving industrial engines anymore. Our state passed a bottle bill and high schoolers were hired to clean the sides of the roads in the summers. We use prisoners to do that job too. Volunteers clean our beaches yearly. Could that possibly be helping?

When we went south in the fall the smog in the air in Los Angeles made the city invisible. California has placed so much emphasis on clean gas in past years. Is that what is happening?

The air in Phoenix was visible for 50-100 miles away. Have they done things to make it better?

Even though the trend has been downward since the beginning of of this study in 1990 we are getting better and better at living in such a way that we are polluting the earth less.

President Obama's leadership and tough regulations made us bite the bullet and do what is right in a lot of ways. Could this be the beginning of the new "normal"? Might that have turned the tide? 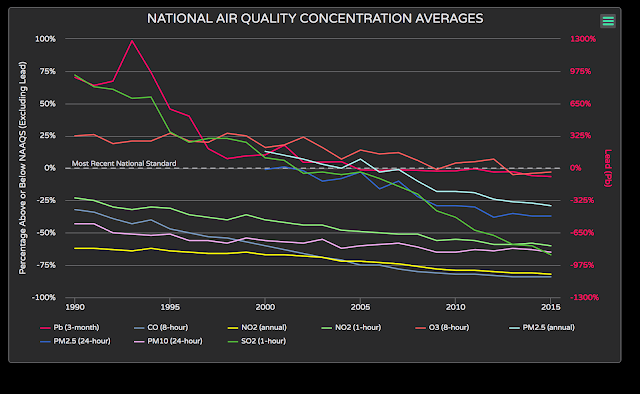 I feel hopeful that the American people will do the right thing in spite of our current leadership. I just want people to quit "crapping" the earth up. That is all anyone can ask.

Oh, and I don't care about a belief system that denies problems based on religious dogma. No God want us to pollute this beautiful planet.