This blog post came to my attention today. I found the printed letter on my desk and revisited my thoughts. Harry S. Truman was a straight forward plain spoken man. I heard him speak from the rear of a train on the campaign trail. Even though Memorial Day has past, I wanted to share this one more time. 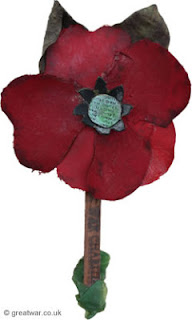 Today a fellow blogger wrote a post from her home in Provence. It was about the fields of poppies that are in bloom. Corey Amaro from Tongue in Cheek told about traditions in France, back road drives and the beauty of late Spring. I was reminded about a visit my husband and I made to the Harry S. Truman Library in Independence, Missouri many years ago where a single faded poppy caught my eye.

Harry Truman served in WWI when he was a young man. He was courting his wife, Bess, at that time and he sent her a poppy he had picked in a place that was once a medieval country in northern France and southern Belgian called Flanders. The flower had been pressed in the leaves of a book. I have always imagined it was the battle field Bible so many soldiers carried over their hearts.  The poppy later was recreated in paper and veterans sold them on street corners around Memorial Day here in the USA. They were a vibrant symbol of the suffering of a world at war.

The tradition has been carried on by the Veterans of Foreign Wars ever since. My husband and I visit the Harry S. Truman Presidential Library in Independence Missouri several years ago. I found that very poppy on display and along side it was a letter. My heart ached when I read that letter from Truman's to his love...Bess. I have looked for a copy online but cannot find it. As I remember it he said, "If I were a sob sister, I would cry over all the lives that were lost in The Fields of Flanders where the beautiful poppies bloom this time of year."

I could only think that nature has a way of cleaning up when we humans continue to make a mess of things. I write about this every year because I think it is the story worth retelling. Memorial Day is that holiday when we set some time aside to remember our veterans. We continue to “make a mess of things” and in the soil where young men and women have lost their lives, flowers will grow once more. How can we help but not be “sob sisters” at times like these! Just a thought.

Note: I received an message from a Facebook source about the letter I mentioned above. This is the first time I have had a chance to read it since I was in the library many years ago.  Here is the paragraph I was referencing:

I walked out to the O[bservation] P[ost] the other day (yesterday) to pick an adjusting point and I found two little flowers alongside the trench blooming right in the rock. I am enclosing them. The sob sisters would say that they came from the battle-scarred field of Verdun. They were in sight and short range of Heinie and were not far from the two most famous forts of this line of defense. You can keep them or throw them away but I thought they'd be something. One's a poppy, the other is a pink or something of the kind. A real sob sister could write a volume about the struggle of these pretty little flowers under the frowning brows of Douarmont the impregnable.

I was very grateful for this information. I did not have the facts quite right in the post above but the central thought remains the same.