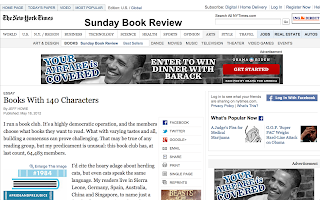 I saw something in my Retire In Style Daily News  that made me hyper ventilate.  It was story that was on twitter tday and had been put up by one the people I follow.   It seems a book club run by Jeff Howe, an assistant professor of journalism at Northeastern University using twitter has over 64,000 members, never adjourns and has members all over the world.  He decided to begin the club by setting up a twitter account and inviting the world to choose a book to read and then share their thoughts chapter by chapter by tweeting to the world.  He formed a partnership with Atlantic magazine, chose a genre and let tweeters to nominate books.  The partnership then narrows the list down to 6 and the membership votes for their favorite.


The whole thing just fascinated me.  The idea that people from around the world would all read the same book and discuss their thoughts all using 140 characters is wonderful.  By talking about the book we are all brought together!  In fact the idea was actually born in Seattle out of an idea that the city would all have something in common if they read the same book.

One City One Book programs take the idea of a localized book discussion club and expand it to cover a whole city.[2] The first such program was "If All of Seattle Read the Same Book" in 1998, started by Nancy Pearl at Seattle Public Library's Washington Center for the Book.[3] The book chosen for the program was 'The Sweet Hereafter' by Russell Banks, written in 1991.[4] Other cities copied the idea, and the Library of Congress listed 404 programs occurring in 2007.[1] (Wikipedia)

The twitter name is 1book140, the NYT Article is called Books With 140 Characters.  I know what, let's all do it. I love it when a neighborhood, city, or the world all have one thing in common that we can talk about.  And if it is a good book, isn't that even better?   Doesn't it just sound like a lot of fun?

Note:  I have used the same hairdresser for 15 years.  Why?  Because we both love to read books and can talk about them while I sit in the chair.  Isn't that wonderful?