When We Forget What We Are About....

Sometimes what sounds like a very good idea is not. It is as simple as that. We live in a box of sorts and, depending on which way you approach that box, things look and sound different. That is what happen when the man at the grocery called someone on speaking a language he did not understand and was not english. That was the problem...the man's willingness to act on something he did not understand. He forgot that he might be the one speaking a foreign language. (As seen on Facebook) 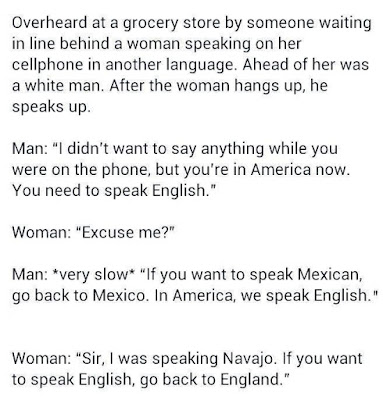 My husband taught me early on in our marriage that most issues are not simple and I needed to be very careful to get ALL of the information before I opened my mouth. Even what seems very straight forward really isn't.

Take gun control for example. Following one of our awful mass shootings this fall I was spouting off about how ridiculous and wrong it was to allow one person to own so many weapons. "There should be laws limiting gun ownership." I said with great authority.

See, when something is written into law it...well it becomes a "law". Down in black and white and everyone is expected to obey it. No nuances or exception.

We own many guns. Some inherited from great-grandparents. My husband and his family hunted to feed the family. We have those guns in our house. Then we have the gun my husband bought with his first earnings on the farm for pheasant hunting and another to hunt deer with. We have given one to a grandson that hunts deer.

Yes indeed, we own quite a few guns. And the law would apply to us too. So, the question remains "How many is too many." We all know there are so many questions and not nearly enough answers.

Illegal aliens come up in the conversation often here in Arizona. Doing the right thing while protecting children is a hard issue to address. A knee jerk reaction would tell you that we should deport the parents and keep the children they came across the border to birth. Oh my, think of the chaos that would create.

How about the homeless veterans that line the highways and live under the cactus here. People will say that we need to take care of them first and then the Syrians last. But do any of those people want a homeless camp or drug treatment halfway house in their neighborhood? Do they want to take in the mentally ill or pay the extra taxes to care for them? And where oh where do we draw the line between what people can choose to do and what they can't? And last of all we might ask where are our latest group of refugees living in our country. Is the Syrian or a religious community welcoming them and helping provide for them?

See, there is never an easy answer. So, the next time we hear a strange language being spoken we need to remember that all of us save the Navajo people and others like them are descendants from someone that "spoke a foreign language" back in the day. We are very lucky they were not sent back to their home country.

And speaking Spanish/French/German and English both is being bi-lingual. Actually, it an enviable skill and I wish I could do that.

We need to remember what we as a country are all about. We are a melting pot that has always welcomed the downtrodden and, depending on where you live, the languages we hear on a daily basis are many. I like that. So there you have it. That is what I think.

I might add that I do not think being an illegal is good and I wish that those people would realize that they need to get in line with those that are trying to enter our country legally. Honest, the law is the law!
at December 01, 2015