Books: "Last Bus to Wisdom" and Being Ordinary Like Me

I really don't enjoy reading books about ordinary people that go about lives of quiet desperation. It doesn't take me out of my own world enough to make me feel as though I have escaped.

I consider myself to be a very ordinary person. While I may have a few bragging rights, most of my life has been spent being careful. In fact, I have trained myself to be quieter than I would like. I don't cuss or use dirty words easily and most of my time these days is spent making what we have useful and in some way beautiful. While being ordinary is nice, it is not what I want to read.

And then comes along Ivan Doig with another story about people I might have lived next door to and much to my surprise, I am hooked. What I find ordinary is not what other people have lived or seen. 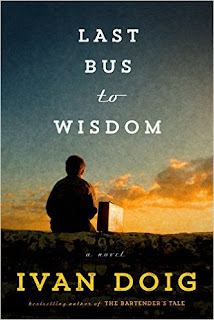 I have read many of Doig's books over the years. The first was Dancing at the Rascal Fair back when  I was in my late 30's. I struggled with it because the life of the immigrants coming to eastern Montana was hard and lonely. While it was interesting, I just didn't want to visit that place even in my mind.

Since that time I have read several other books written by this remarkable writer of the western story. The latest released that came after his death last year was like many of his other stories in that it reflected what almost felt like an autobiography to me. He always made me sense that he had lived the story from the first page.

The Last Bus to Wisdom was set in the 1950's. It was a different time. I think that innocence resonated through the whole story and really reflect the way we remember that era in the west. Hoboes were just down and out and even the thieves weren't all that bad or frightening. A story that revolves around a boy left on his own to travel across the country on the "Dog Bus" seems unlikely to us today. His uncertainty and fear hid behind a belief in the hope that the charm of an arrowhead and a pair of Indian moccasins would keep him safe. In his wicker suitcase he carried an autograph book that he clung to throughout the story. His goal was to collect other people's wisdom and to learn new cuss words and about sex. He was about 10. Amazon review tells us:

Donal Cameron is being raised by his grandmother, the cook at the legendary Double W ranch in Ivan Doig’s beloved Two Medicine Country of the Montana Rockies, a landscape that gives full rein to an eleven-year-old’s imagination. But when Gram has to have surgery for “female trouble” in the summer of 1951, all she can think to do is to ship Donal off to her sister in faraway Manitowoc, Wisconsin. There Donal is in for a rude surprise: Aunt Kate–bossy, opinionated, argumentative, and tyrannical—is nothing like her sister. She henpecks her good-natured husband, Herman the German, and Donal can’t seem to get on her good side either. After one contretemps too many, Kate packs him back to the authorities in Montana on the next Greyhound. But as it turns out, Donal isn’t traveling solo: Herman the German has decided to fly the coop with him. In the immortal American tradition, the pair light out for the territory together, meeting a classic Doigian ensemble of characters and having rollicking misadventures along the way.

Like so many books I have read throughout my life, the real story was hidden from me until I bought into the idea that I wanted to go along on the adventure. This was a very good book I think, maybe one of Doig's best. But I will let people that know more about the value of books and the story of ordinary people to make the final judgement. I live too close to that world.

Willa Cather may have been one of the first American authors to write about ordinary people. I love One of Ours and My Antonia.
at July 05, 2016