Games in the RV Resort...living the Snow Bird life! 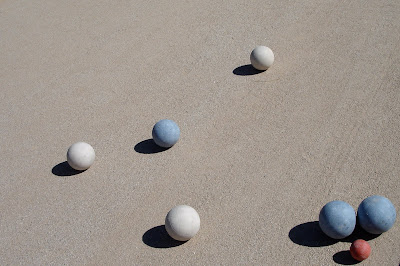 HOW MANY DIFFERENT GAMES DO YOU KNOW HOW TO PLAY?  Why?  Well retirement is all about playing...life becomes a game.
I, for example, I play with words.  The blog is my game board and words are the game tiles.  Still others love a game of golf or a game of bocce.  Card games, including Texas Hold em, are great favorites around here.  My friend played in a bocce tournament with us this morning and left immediately to play Bridge.
I am just pointing this out to you because I believe that games and puzzles are a wonderful way to keep our minds alive and allow us to socialize with others.  We fill our days with tasks including family, business and recreation.  For the recreation part of our life, games are the best thing to come along.
Here in the resort you will need to be fearless...this is your opportunity to learn new things in the company of people just like you.  You can take that first yoga class with other people that are taking their first class.  You can play your first bocce game with beginners like you.  Age is not a factor...the leaders in our bocce ball tournament include people in their eighties and people much, much younger!
So if you are an expert, here is your chance to teach.  If you are beginner, here is your chance to learn.  Here are a few choices you will have if you choose to live with snow birds part of your year.
Texas Hold Em (rules here)  On Monday night a group of people gather in the card room to play poker...the longer a player stays in the game the more he/she wins.  I hear it is a great lot of fun and, if you are lucky, you may even win a little petty change.
Euchre  (rules here) is played in the afternoon almost everyday.  For those of you from the mid west this is good news.  There are even a hardy few that play every day.  I don't know how to play this game but it does sound fun.
Cribbage (rules here)  I learned this game as a child. Although the rules look complicated, it is really very easy and lots of fun.
Bocce (rules here) is that game you see being played in parks using concrete balls along with a smaller ball called a Pallino.  According to Life Script, healthy living for women! Bocce has been around for thousands of years and is still a favorite of the young and the old.

Throwing balls toward a target has always been a favorite sport of the common man. The Egyptians were the first to play bocce around 5000 B.C., using polished rocks. The Egyptians passed the game to the Greeks around 800 B.C., who then taught the Romans to play it using coconuts! Emperor Augustus was supposedly a great bocce sportsman. The Roman influence in the game is seen clearly in its name; the word bocce derives from the Latin bottia, meaning boss.

Horse Shoes is a favorite here in this resort.  Men show up in the morning and games go on all day.  Alpha Horse (rules here) says, "Horseshoes is a game that is extremely easy to learn, yet difficult to master. While no article can hope to help your mastery of the game (sorry – it takes time and practice to get the knack for pitching a horseshoe), by the time you are finished with this article you will have a full understanding of how horseshoes is played and scored."
Pickle Ball   We have just added a Pickle Ball (rules here) court here in our resort within the last year.  This court is used hard everyday that it does not rain or blow.  Players often practice on the court for competition at the city parks and recreation facilities.  It is a fast game with rules that are similar to volleyball but played with a paddle and a lightweight ball.
Bridge is a great favorite with players both in this park but in parks near by.  If you love a challenging game, you will find wonderful playing partners and couples to spend time with.
Golfers with out partners will find a list of people looking for a game in the recreation director's office.  I noticed recently that there was a very long list of people that had signed up.
Bingo players have one evening a week to play and win.  If you love this game of chance, you will have lots of competition.  Our auditorium fills on this evening for a game.  You can win prizes/money at this event.
We also have a tennis court, pool tables and, for the card players, several rooms with the appropriate tables.
The choice is yours.  There is no reason for anyone to be bored here. When people ask me
"What do you do?" I am always surprised.  I think how do I have time to do what needs to be done.

Have a wonderful day.  You will more information on games on Retire in Style Blog.