MIX Portland's Magazine of Food and Drink...Must have!!! 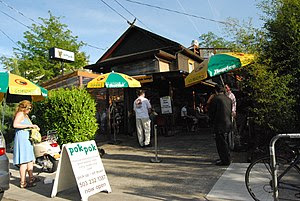 A description of Pok Pok Thai Restaurant was in the last MIX magazine recognized as having a great patio.  The Oregonian voted it the restaurant of year in 2007  Image via Wikipedia
THEOREGONIAN NEWSPAPER
The Oregonian, Oregon's newspaper, is surviving as it always has.  It is delivered to doors in communities throughout the state.  I lived in Eastern Oregon from 1941 to 1959 and the paper came to our door even then.  We used to have two Oregon newspapers...one Democrat and one Republican.  If you went to visit a home and saw the newspaper on the couch you would know where their political sentiment were.   The Oregonian was the Democratic publication and The Journal the Republican.  The Oregonian's owner bought The Journal newspaper in 1961 much to the disgust of it's loyal readers.  After publishing both papers for several years, the Journal fell out of favor and the state was left with one major newspaper.
In a time when newspapers are closing their doors completely, the Oregonian has morphed into a new entity...while the print edition is still delivered to our door, an online version called OregonLive.com allows us to stay abreast of news all day.  There is no charge for OregonLive.com so they must depend on advertisers to stay up an running.
MIX MAGAZINE
For the last year or so they have been printing a magazine called MIX Portland's Magazine of Food+Drink. The promotion that the Oregonian has done for the magazine has been, I think, nothing short of genius.  In our trendy neighborhood, the magazine was delivered at our door by some mysterious person at no cost.  I don't know who else got it but our local grocery carried the magazine on it's racks.  Then it came in the mail for several months.  This last month it actually was included in our newspaper.  This magazine is not one big advertising puddle of nothing like so many city magazine are.  I keep each issue and will subscribe to the magazine now because I simply cannot do without it!
The last issue had a list of places to eat and drink with outdoor patio seating...isn't that what we are all looking for in the summer.  We keep it close at hand for reference.    It also included recipes for salads that made you want to lick the pages.  One recipe went like this:

The Smokery stall at the Saturday Portland Farmers Market sells an insanely delicious smoked salmon that's good all by itself on crackers, or in a salad with whatever produce looks best that week -- including fennel, cucumber, or in this case, green beans and cherry tomatoes.

Bring a medium pot of water to a boil. Add the green beans and cook until they turn bright green and are crisp-tender, about 1 minute. Drain the beans and immediately put them in a bowl of ice water to stop the cooking. Drain and pat dry with paper towels.

Combine the green beans, cannellini beans, olives, tomatoes, chives and salmon in a large serving bowl. In a small bowl, whisk the garlic and red wine vinegar together. Slowly whisk in the oil. Add the vinaigrette to the salad, season with salt and pepper and toss gently with your hands. Serve at room temperature.
-- Ivy Manning

I could only think that even if I didn't want to make the salad, which I do, I would want to make a trip to the Portland Saturday Farmer Market to buy that smoked salmon.  MIX has made the little city feel very intimate.
If you are from out of town you can go to the OregonLive.com website for the magazine and get a lot of great ideas for recipes or even a future a future visit.
I  need to go now...the Sunday paper is calling...I love big paper day.  I will read all that cool Sunday stuff that we all enjoy so much.  I hope you find the information helpful or just interesting.

"Freedom is not a state; it is an act. It is not some enchanted garden perched high on a distant plateau where we can finally sit down and rest. Freedom is the continuous action we all must take, and each generation must do its part to create an even more fair, more just society.”