The Trouble With "Stupid"

"Everyone is a genius. But if you judge a fish by it's ability to climb a tree, it will live its whole life believing that it is stupid." Albert Einstein

When I was a young woman I happened to be in the Smithsonian when it was celebrating Albert Einstein's 100 birthday. It was 1979.  As I stood before the exhibits, I wondered how such a smart man could have struggled so with school. I was a teacher and I began to wonder about how I taught and what I was missing.

I am always inspired by such an awesome intellect. While I have no idea how physics works, I do know that Einstein's did spend time thinking about things that I understood. One website described him as "humble, likeable, kind, played violin and could talk to anyone. " ...and he was very quotable. He said:

Imagination is more important than knowledge.
The important thing is not to stop questioning. Curiosity has its own reason for existing.
Anyone who has never made a mistake has never tried anything new.

I fell a bit in love with Albert Einstein back all those years ago. But I had not thought about him lately. Then this morning a friend sent me this cartoon in an email. Read the quote and tell me if you understand why he was saying it. His mind did not work like everyone else's did. When he was put in the classroom with material that fit everyone else, he did not succeed. He was a fish that could not climb a tree. When he talks about education he is speaking from personal experience. 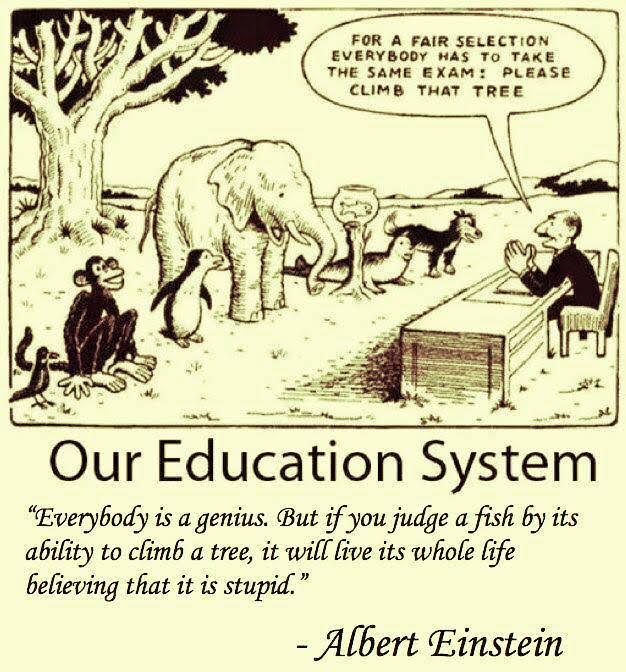 Stupid is not a word I use lightly. I don't allow my grandchildren to use it ever. When the urge to swear that word outloud comes to my lips, I remember that the person I am getting ready to blast may just be different and might even be a potential Einstein. Like the fish that tried over and over to climb the tree, that person probably has not been put in the water yet.

Sadly enough, what we believe about ourselves is a self fulling prophecy. If we were told or shown that we are less than worthy, it was hard not to believe it.

Luckily Einstein managed to overcome school. They thought him retarded but his stubborn nature won and he did not buy it...not in the end. Eventually he swam in a very big ocean. We can all be thankful for that.