On Women's March: What Do You Want?

I was listening again to the news. Today we were seeing the flip side of what a Trump supporter might be thinking when women around the world took to the streets to simply have their say. Today the Catholic Church here in Tucson are marching in a protest against abortion. I suppose there are other groups marching in protest to those protests. Interesting isn't it?

Then I saw a post on Twitter by Michael Flynn, son of a hopeful cabinet member. I'm not sure what victory Flynn is talking about in his tweet however the statement that women already have equal rights seems a reality to him. That was interesting to me because I know that rights don't come with laws. Rights come with a change in attitudes by humans. The election of our 45th president does not make me feel that we are there yet.
But what struck me as most interesting was that by saying "What more do you want?" he implied that equality was his to give. The final slashing came with the implication that women as so shallow that they would be satisfied if he just gave us more money to get ourselves beautiful with a mani-pedi.
Now, I do know that I am reading things into his words. That is really not fair to him. I am sure that he intended no slight...well not that sure but he does have the right to speak his mind.
However, in a world where women are manipulated (no that is not just in the power of a women) and denigrated for simply being women to the point that they actually will march, there is something very wrong. It is all about perception and perception does count. A lot more goes into a conversation that words...body language, tone of voice for example.
What do we want? We want absolutely no talk that will make us feel less than worthy. The fact that it is rude is not the worst thing. It is just plain mean. The fact that it makes the man look bad might come into consideration but that is up to them to realize. If they are so small that making us look bad makes them feel good, they have a problem.

I might add here that women should not do any of those things either. Wrong is wrong!
We want there to be no prejudice against any race or religion.

We want our insurance companies and health insurance everywhere to pay for birth control so there is no need for abortions. (I do hate abortion a lot.)
We want to be listened to. We think we have some very good ideas. Young women across this world are living in a place of inferiority. (see yesterday's post).

We want the elderly and less fortunate to be viewed as real people and for their benefits to be viewed as deserved and not an entitlement.
We women want to be valued for being the other half of our population!
As for equal rights and that wonderful glass ceiling and the equal pay that Flynn talked about...that is something for another time. Trust me women across this country are still not seeing equal pay and promotions but the practice is not as visible as it once was.
Just a thought.

b+
Note: I do not know this man. Is he a misogynist? Maybe but I did not say he was. You find out and let me know. :) 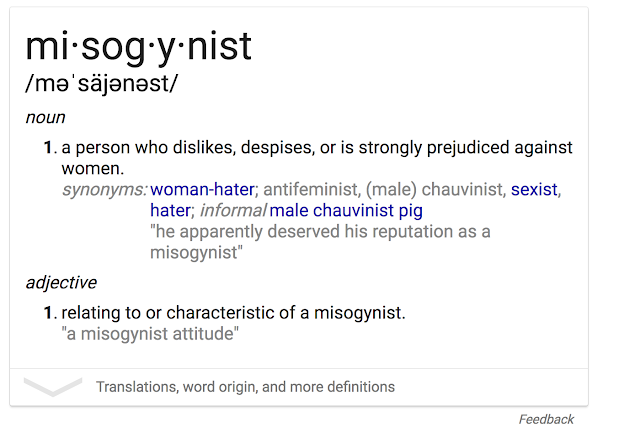