Yesterday began at our local French breakfast place. We were going on a road trip to a winery up the Columbia near Biggs Junction across the river. I had not told anyone we were going and our oldest son/family was joining us for the day. We knew the way because we live here. We had not opened maps or even looked at my iphone that morning

It was misty (liquid air we call it here in Oregon) and overcast. The restaurant was full even though it was early in the morning. We carried on a quiet conversation and our granddaughters either colored or read.

We left by two door and as my husband and I approach our car, my iphone buzzed and a notification came up. It said:

Nothing else. Chills went down my spine. HOW DID MY PHONE KNOW WHERE I WAS GOING????

All sorts of things went through my mind but nothing even made sense to me. Why would it do that?

Travelogue of our day...was my phone listening to us all day?

The winery we were headed to is called Maryhill Winery and sits next to the Maryhill Museum. The name came to be because a man named Sam Hill built his version of a castle on the dry, windswept hillside in the eastern part of the Columbia Gorge on the Washington side and named it for his wife.

But the version of that story we alway heard was much different and is enough to draw people to the castle for the story alone. The truth is it is now and always has been a museum.

I seems Sam Hill invited Queen Marie of Romania to visit the site and she dedicated the castle as a museum. Gossip repeated to this day had it that Hill was romantically involved with the queen. It was (and still is) gossiped that she arrived, took one look, told Sam Hill she would not stay and went home! If you saw where it is located you would be with the queen. In reality the story is much different but a romance gone wrong is more fun to tell. Here is the story told in a newspaper article:

On November 3, 1926, Queen Marie of Romania (1875-1938) dedicates Maryhill Museum of Art. The Queen is a friend of Maryhill builder Sam Hill (1857-1931) and is in the United States on a 50-day visit that dominated newspaper headlines. Accompanying Queen Marie are her two youngest surviving children, Prince Nicolas (1903-1977) and Princess Ileana (1908-1991). The museum is to be housed in Hill's half-finished mansion overlooking the Columbia River gorge near Goldendale in Klickitat County.

To this day when someone does something foolish we say "What in the Sam Hill?" Interesting huh? 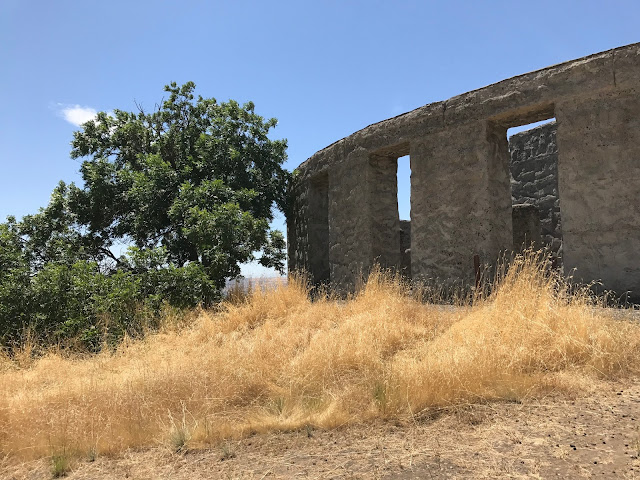 I was raised in the eastern part of Oregon. This dry landscape feels a lot like home. But, as we traveled back west again I was grateful for the cooler air and the green trees. I felt at peace with the world.

Have a wonderful weekend.