Getting Caught with my Snopes Down

See, the thing is all of those people that figure out a way to ruin a politician with misinformation can be liberal too. I was caught yesterday while roaming around on Facebook. 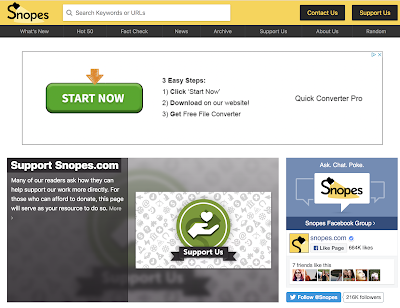 That share button is so tempting when you see words that you do not want to see ever. So, share I did. (Snopes info here.)

I woke up during the night wondering if that guy really did say that and who in the world is he. As I sat down with my green smoothies this morning, I began doing a Snopes check on the post. What did I find?

So, people don't do what I did without checking first.
I shared a video of a man telling a young person to sit down when they questioned his statement that global warming was probably caused my bodies heat (said in jest I am sure.) That one did make me mad because politician forget that those young people are future voters and have parents. I will not take that one down.
So, what is the point? Be sure to check and be very careful. What we share usually involves REAL people that may be damaged by something that is untrue.
Oh, and I did take that post down...deleted I hope forever.
Have a wonderful day.
b+
at October 15, 2018