Books Made for the Movies (up for grabs)

The question is: Do you see the characters in the books that you read? Are they real  in your mind or do you struggle with that? In some cases it seems to me that the person the author is describing is someone I know. Do you suppose authors do that and we can read between the lines? I think they do.

So it is not surprising that I have read several books that need to be made into a movie and I want to pick out the cast of actors that appear in said movie. Wouldn't that be so much fun to do?

Many years ago I read a book called The Straight Man by Richard Russo. I think that it may have made me laugh more than any book I have ever read. Here is the short blurb that Amazon posted about the book: 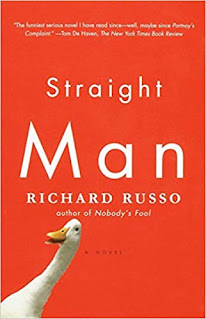 William Henry Devereaux, Jr., is the reluctant chairman of the English department of a badly underfunded college in the Pennsylvania rust belt.  Devereaux's reluctance is partly rooted in his character--he is a born anarchist--and partly in the fact that his department is more savagely divided than the Balkans.  In the course of a single week, Devereaux will have his nose mangled by an angry colleague, imagine his wife is having an affair with his dean, wonder if a curvaceous adjunct is trying to seduce him with peach pits, and threaten to execute a goose on local television.  All this while coming to terms with his philandering father, the dereliction of his youthful promise, and the ominous failure of certain vital body functions.  In short, Straight Man is classic Russo—side-splitting, poignant, compassionate, and unforgettable.

The thing is I am really surprised that someone did not pick this one up and hire the cast from Mash. But too much time has passed and some of the members of that cast have passed away. Darn. Time has taken its toll.

I have read the Pulitzer Prize winning book by Russo, Empire Falls as well as The Risk Pool and Bridge of Sighs. You can never go wrong when you get your hands on a book by him.

Claire’s a rich widow on a mission, who partakes with abandon from the pharmacy stored in her Prada purse. Rob’s an aging reality show celebrity.Stuck on the same flight, bound for the same eccentric town, she hates him on sight. She thinks she knows all there is to know about him but is dying to find out more. He’s disinterested but somehow still sees right through her. But they’ve both got big problems. Hers is in the Louis Vuitton carryon in the overhead. His is in his pants.

To Claire’s dismay, Rob turns up everywhere she goes, yet they form the unlikeliest of friendships. He cares for her in ways she’s never known before. He could be the best thing in her life—or the worst.In a place full of secrets, including their own, they help each other find answers they didn’t even know they were looking for, yet some questions linger. What happened to Rob’s first wife? What happened to Claire’s husband? Will they live through the answers?

This is Kathleen O'Donnell's first but two other's followed and can be found on Amazon. I read it several years ago and I still think about that book and a possible movie someday. It is almost as though it was written for a movie take off.

So, have you ever done that...pick the cast as you were reading a book? I am interested.

Email ThisBlogThis!Share to TwitterShare to FacebookShare to Pinterest
Labels: Books, Have I Said Thid Before?, Humor