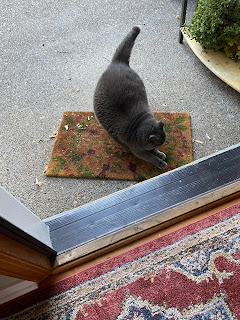 My daughter has a cat...not just the ordinary cat but then I am quite sure none of them are. He decided to come and live with her when my grandchildren were still children. The oldest is 27 years old now and was less than ten when the cat arrived. He lived in the front yard laying in wait for the garage door to open where food for other animals was available. After all, a cat needs to eat!

But his need for food did not include being owned by anyone so he was very illusive. We all chased him...at night Teghan the dog and two grandchildren. During the day...I was chosen. I was the Nanny of sorts and the need for order did not include a stray cat in the front yard. It was a very long time before anyone was able to catch him.

So off to the animal shelter he went. My daughter was chosen to take him to the "animal shelter/gas chamber". My daughter did not know that place was like that. She was sure the cat would get to go live on the farm and have a barn all to himself. She arrived only to be told that they would gas him because he was "feral". Back home he came. 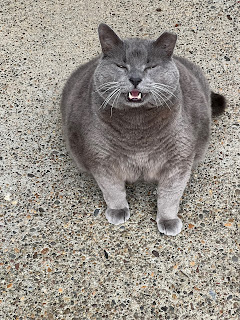 His ear was clipped branding him as a "bad cat", he lost his manhood and lived in the cat cage until they were sure he was not going away. I had to remind them that the cat was impossible to get rid of so there was no worries on that front.

They named him Vincent Van Gogh the Cat...Vinnie for short.

Over the years Vinnie lost half of his tail in an unrecorded incident, has on several occasions decided to live under the house and has eaten 1 whole ton of cat food. His life for several years has revolved around the garage where his food dish is always full.  He is so big now that when he squeezes under the house, he cannot get out. That maneuver requires a big human with long arms.

He is shaped like a bowling ball and, if he turns over on his back, he is like a turtle and can not put himself right side up. When he runs, I am reminded of a waddling seal.

When my daughter and her husband leave town I get to visit Vinnie twice a day. His disdainful attitude makes me wonder just why I am walking to his house but I guess I need the exercise so it is okay. Occasionally, he is is delighted to see me and will snuggle on the couch with me. Others he does not even lift his head.

I do love this old soul. He is, like every other cat, one of a kind.