MOURNING DOVE AT THE DOOR...life in the desert, Tucson, Arizona 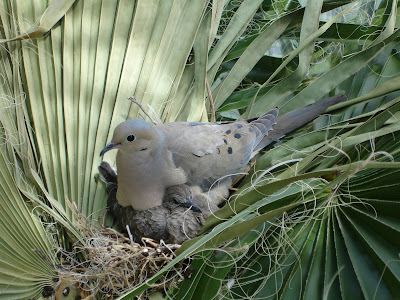 She or they built the nest high in the Palm tree. It was safe from those things living in the desert that would harm the egg or the chick. Wind blew and rain came but the nest remained safe from harm. No one even knew they were there while she watched players yell after perfect Pickle Ball shots or visited in the street. The soft coo of the Mourning Dove was just background music to their day.

The the bees came...a great horde of bees and workers in the park set about killing a hive on the move.

Fear of Africanized bees in this part of the world guides this kind of thing. We do not know what kind of bees they were and the thinking was better safe than sorry. Life went on. We don't mess with these bees!

While the workers were hanging around they notices a few branches beginning to give away on the palm tree where the bees had gathered but no ladder was handy so it was left to hang. Then the winds came again, this time much harder and that branch fell down until it was caught in a branch growing very close to the ground. The mother Dove and her one chick stayed attached to the nest until it settled. She sat on the nest with a baby that was almost as big as she. The humans came to wonder at her treasure and pictures were taken of the pair.

Almost a week went by and the chick began standing on the edge of the nest. It could hear the mother calling from the neighboring roof...fly away my baby...but the nest was safe and very close to the ground. You could see the baby deciding...leaving jumping down or flying up.

A road runner had been watching from an Oleander that lined the property boundary. It hopped closer for a better look. The humans that lived across the road chased it back into the desert with rocks, running as fast as they could. The chick was safe for another day. 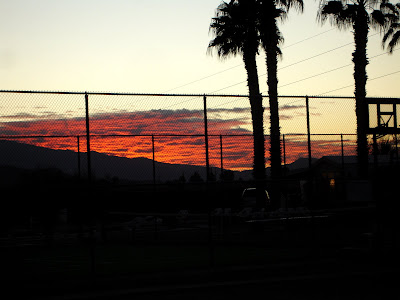 At the break of day the human man sat with his coffee and paper, the door open and only the screen keeping the outside out. The Dove sat on the top of the car and then on the railing looking in, cooing in that mournful way that they have. He talked to her and then walked to the nest to find the baby gone, remnants of a fight left behind. The human and the Dove mourned together for a loss in a world where safety is very rare.