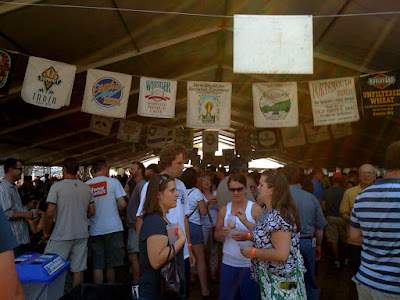 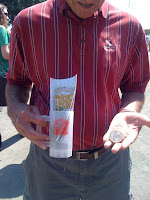 Portland, Oregon, July 25, 2009
The Oregon Brewers Festival is in town.

Portland, Oregon is notorious for the number of "brew pubs" in it's metro area. When doing a search on google, I got over 1600 hits. So when the Brew Fest comes to town it is indeed a very BIG DEAL!!! After all with 80 different brews, Mt. Hood on one side and the Portland skyline on the other, how can you miss.

Vendors from around the country set up camp on the Willamette River water front in huge tents and Portlanders give them just what they want...a lot of attention and waves of shouting from tent to tent! Families come and set up camp along the fence that separates the water front walking path from the grounds. Admission is free and EVERYONE is carded as they enter. Small children are admitted...I don't know what they do about families with older children. 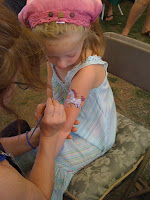 Portland, being the place that it is, provides activities for the children in Root Beer Tent where tattoos are painted on, a water table is set up and warnings about the dangers of alcohol are featured on a large display. Donation were taken at the tent to provide schooling for homeless children. 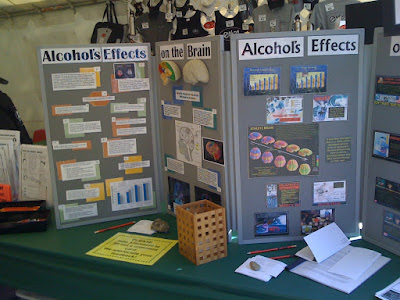 So we went with our son and two granddaughter, found 5 folding chairs, moved them into the shade under a tree and whiled the afternoon away sipping and visiting. Believe it or not the Acacia Beer was a great favorite with very long lines. I didn't take a count but I am thinking that the older crowd thought this was the find of the century...beer @ acacia berries!!! The crowds were huge (70,000 in 2008) in years past and I see no reason why the 22nd Annual Festival should not be the same.

We started the day with lunch at Goose Hollow Pub located at the base of the West Hills. The old pub was once owned by our famous mayor, Bud Clark and remains a mainstay on the Portland scene. Then we ended the day at Dan and Louis's Oyster Bar. This also a favorite of ours and has been since our 45 year old son was 9 or 10 years old. (It has been in existence since 1907.) We love to go with him when he is in town. The restaurant in located in the down and dirty Skidmore district almost under the Burnside Bridge. I can honestly say that it has not changed one bit since our first visit all those years ago. Bums line the sidewalks and people step over and around them without a thought. I even had one man fold up his (profane?) sign when he saw me coming with my 6 year old granddaughter. We exchanged greetings and I followed the crowd up the sidewalk. Outdoor tables are featured at almost every restaurant this time of year...we love the whole scene.

Incidentally, most people are using our public transportation for this event. Parking downtown is very expensive and hard to find. Our Max line is becoming more and more popular all the time.

I just thought you would all want to know what is going on here in town. Have a wonderful weekend.