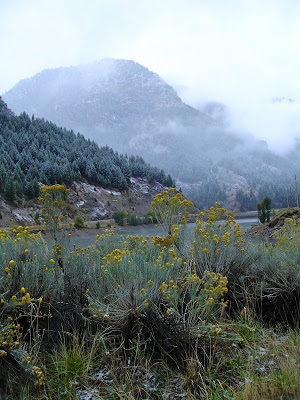 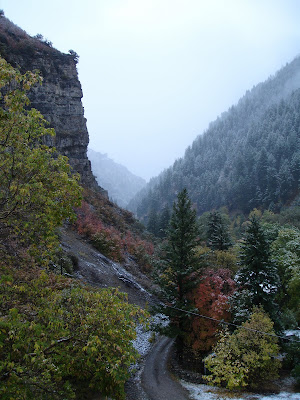 We left Portland on Saturday, October 3rd. We arrived in Las Vegas on October 5. The stops on the way were both good experiences. The snow...well that was another thing. As we passed through Idaho on I-84 and then south into Utah it was just beginning to snow in earnest. We noticed in the news the next day it had snowed 2 feet. The unexpected seems to be the rule when we travel. If you are just beginning to travel or have done very little, I am suggesting that you do a humor check...the attitude has to be right or you will NOT have fun!

On the second night we stopped in one of our World Mark condo units located east of Ogden at Wolf Creek World Mark. (The resort is located 13 or so miles east of Ogden on Highway 39.) Even though it did snow as we were leaving, I did get some beautiful pictures of the area. All I could think was "Mother Nature must be a little surprised by this too." Snow fell on trees still covered with beautiful red and gold leaves.

We stopped at a restaurant set in Ogden Canyon for breakfast called The Oaks. Locals come here for the coffee klatch each morning. The restaurant has big decks outdoors and the view are spectacular. The food was just fine...not great but sometimes we take the trade offs and are glad for the view or location. 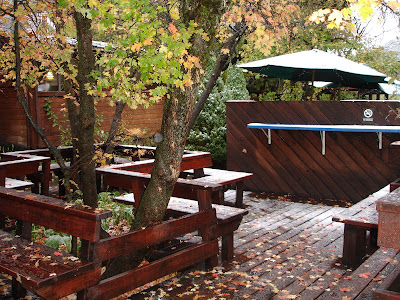 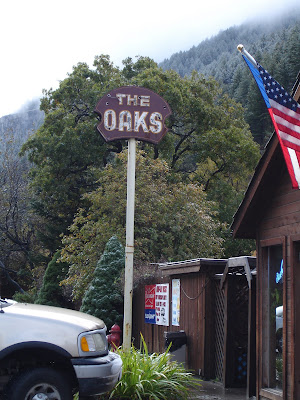 I am from the generation that remembers two lane roads, falling rocks and curves that demanded a honk before you went around them. We traveled on beautiful 4 lane roads from Portland all the way to Las Vegas. Save a few pot holes here and there the roads we well maintained. Unlike the trip through California where concrete is crumbling and any road that is not a major federal highway can be in very poor condition we found the highways in Idaho and Utah to be almost flawless. We traveled south to Las Vegas on October 5th and arrived here at our World Mark facility at rush hour. We had a late start that morning...pictures you know. It was not a hard day for us at all. I called as we were traveling toward Las Vegas outside of Mesquite to see if we could get bonus time. We booked into a room at the World Mark on Las Vegas Avenue and paid $52 for a one bedroom condo. We used our points for three nights at the resort. The rooms are beautiful.

We will leave here on Friday and travel via Boulder Dam to Phoenix then to Tucson. I will post pictures for your information. Hopefully no more snow. Keep your fingers crossed for us.

No One Honked Their Horn!

My granddaughter is learning to drive! She had signs all over her car, STUDENT DRIVER  they say and her mother sits in the front seat monito...