How I discovered the real Puerto Vallarta!

THE CATHOLIC CHURCH
On the corner of the street in central Vallarta where the small Catholic Church stands you can watch the people in passing buses either tip their hat or cross themselves.  Every Catholic does the same thing no matter how many times a day they pass that intersection.  In a country where over 80% of the population is Catholic it should not surprise us that the church is such an important part of the community's heart.

The story goes that the church was begun about 150 years ago but because of money concerns went for many years with only a foundation.  Then it occurred to the people that they each owned a few bricks or some large stones.  They began building the church with what they had in their hands and the sweat of their brow.  By the choice of the people, the exterior has never been changed.  Even though the exterior is very humble it belies the opulence that lies within.  I am always awe struck by the beauty of churches like this.
THE MARKET
But it wasn't until today that I began to understand what all the fuss was about the little PuertoVallarto Pueblo located an hours drive south of the Grand Mayan Nuevo.  This was our third trip into town this week but this time we left the taxi at the middle of the Malacon (boardwalk along the water) and just began walking.  My husband bought a watch battery at a small joyeria (jewelry store) and I looked at costume jewelry in a small shop down the street.  Then we began walking south, along the water then back toward the mountain and into the outdoor market.  Unlike many markets we have visited the vendors did not hound us here.  It was a leisurely morning in the market it seemed.

FOLLOWING OUR NOSES
We crossed the river and walked west toward the ocean through a row of vendors.  The little booths were situated under trees that looked like the Banyan Trees we had seen in Hawaii.    We began to notice a slightly higher level of shops.  There were several beautiful restaurants among the stalls.

Because we were letting the day unfold without a plan we had not researched our route nor what we might see.    Every corner brought a new surprise.  One of the best was The River Cafe.  It's by-line was Cuisine and Nature...judging by the setting they truly were living up to their name.   Even though we were not thirsty or hungry we stopped anyway and lingered over 2 for 1 Margaritas.  If we ever get back this way we will definitely be having a special dinner there. 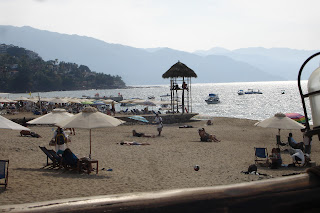 OLD PUERTO VALLARTA
At the ocean front we turned south again and that was where we found the beautiful Old Puerto Vallarta water front.   Cafes lined the Malacon and tables spilled over onto the sand.  I was taken back to Marbella in Spain.  The charm and beauty of Puerto Vallarta had finally unfolded in front of us.  The condo rental along this part of the water front were beautifully fitted out with Bougainvilla  and ferns of every type.  Small shops lined the side streets.  I could feel the upscale atmosphere immediately.

We stopped at a restaurant called the Blue Shrimp that sat on the beach.  I loved the waiter's aprons so I talked the owner into looking a clean one up and I bought it from him.  We had a delightful lunch in the sun while watching the para-sailers and jet boats.  There was even an occasional movie star sighting.  Vendors stopped often hopeful we would buy something.  I had a absolutely perfect day.

Now I get why people that love beautiful things and settings are drawn to this part of Mexico.  Those of us that live near border towns do not see this side Mexico ever.  We are having a wonderful time...wish you were here.