How to stay young! Spend time with children. 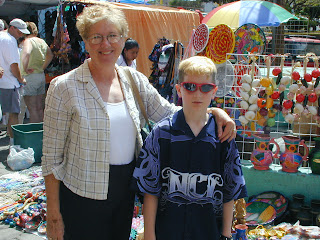 I have always loved being a grandmother...well most of the time.  I didn't like to be in trouble with my daughter-in-law or my children.  I didn't like it when my grandchildren tested my powers or brought me to my knees with crying shrieks.  Still, when I look back to the beginning, I think I always loved it.  Now 19 years later my second grandchild will be graduating from high school.  How can that be.  When this child was born I felt very young, like a parent myself.  I thought of my children as my peers and I moved with the same energy they had.  I have come to believe that I feel as youthful today as I did then.  Maybe, just maybe the grandchildren are the reason.  I know they say laughter keeps us young.  If that is true, I will never grow old.
This grandchild is the one that wanted to know when his grandfather and I were going to get real jobs like his mom and dad.  We were retired and he was worried we were lazy. Following this line of reasoning he decided one day that I could get a job at the "untying store" because I had managed to untangles a very long string that was connected to his lego set.  He was thinking there was hope for me after all.
This is the grandson that would hang onto the timeout chair with all his life.  It was as though he thought it would fly away if he didn't.  He flew around himself and had only his own actions to judge the chair by.
This is the grandchild that knew the value of a dollar.  I sent him to the dollar store one time while I shopped for fabric.  He bought three rolls of electrical tape.  He knew the power of electrical tape and called his mom to tell her about the good deal he had made.
This is the grandson that bought me a water tight box for my ipod just in case I ever fell out of a canoe.  He valued my ipod a lot.  I have never been in a canoe and don't plan to be.  But just in case....
This is the grandson that was sent home from the baby sitters because he wanted to share his new big boy underwear with superman on it. The sitter was upset when he pulled down his pants in the back yard.  Several years later he discovered the pee hole in his underwear and wondered if grandpa knew about that hole in big boy underwear.  It was the most convenient thing he had ever discovered.
I took this boy to watch houses being built and made his grandfather stop so he could get a good look at big trucks and construction equipment.  I thought it was funny that he thought I was the one that would love seeing the houses and went along willingly.
He and his sister stayed at home for several summers in a row with me and I drove him to the velodrome so he could ride bicycles there.  I watched him develop courage at speeds that blew me away.  I am very grateful I was the one that was allowed to observe him on that course.
So you tell me.  Where did the time go?  He is 18 and I still feel very young.  Is it possible that we will enjoy adulthood together?  Grown up people living in the same world?  I am willing if he is.
So my grandson E-man,  Congratulations!  I hope you have loved being with me as much as I have with you.  Thanks for the memories.

I love you,
Grandma b