Technorati Tags:  PDX Portland Oregon WWII Flying Tigers
Portland is a magnet for people from around the world. I think that is one of the things I love about this city.  It is not uncommon for me to visit with a tourist from Switzerland with a beautiful big camera and within a few minutes be talking to one of the oldest living survivors of the veterans of the all-Chinese American Flying Tigers.  Honestly, I don't know how that can be but it happens to me here all the time. The only thing that changes is the cast of characters. 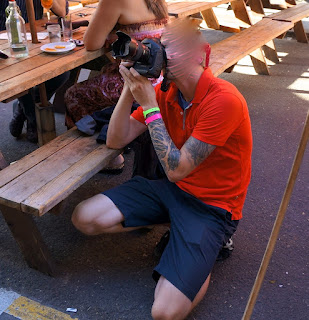 We were eating dinner at the Oyster Bar* located on Ankenny Alley in Old Town near Burnside. We had taken a seat inside near a window and ordered a drink when a couple wandered up to one of the picnic table outside.  The man had a beautiful big camera he put down on the table. Not 10 feet away a far bigger camera was being used by a far younger man. I could not resist the temptation to compare the cameras. The encounter resulted in a conversation with a gentleman from Switzerland. He and his wife were here for the second time and traveling around the area in a rented Cruise American RV.  It really was so much fun to just stop, chat a bit and welcome them to our beautiful city.

After our drink we asked the waitress if we could be seated in the dining room. We love to sit in there because the pictures on the wall are all about Portland maritime history and how it related to what we are today.  But the answer was no.  She was very sorry but the dining room was being used by the WWII veteran group of Chinese Americans that had been the ground support crew for the Flying Tigers. The unit of the WWII Fourteenth Air Service Group/ Fourteenth Air Force just happened to be in Portland for their 2012 reunion. Now that did stop me in my tracks. This group was formed prior to Pearl Harbor in 1941 and the pilots flew their first misson just 12 days after the attack.  That has been almost 71 years ago.  These survivors are becoming very old.


I wandered into the dining room after they arrived and stopped at the first table in the room.  Heaven knows I did not belong there and I had no idea what to say but I wanted to talk to just one of those men.  Warren Lee was sitting with his 3 companions quietly waiting for his food to arrive. It turned out that Warren was the oldest man in the room.  He is going to be 98 on his next birthday. He graciously allowed me to take his picture and smiled politely as I blathered on. Seeing him was the highlight of my day.

Don't you just love it when a plan you didn't even make comes together?  WOW!

*Dan and Louis Oyster Bar, well-known locally and around the world, celebrates over 100 years of serving the public its signature seafood dishes. Since Louis C. Wachsmuth opened the doors in 1907, five generations have been involved in carrying on the family tradition. A century later, and an Old Town landmark, the Wachsmuth family invites you to share a Portland favorite. (from http://www.danandlouis.com/#)
Incidentally, the Ankenny street locations is also home to Voodoo Doughnuts and several other restaurants.  The street has been vacated and is now lined with picnic tables and lights are strung across the narrow alley.  It is very charming especially on a beautiful late summer evening. 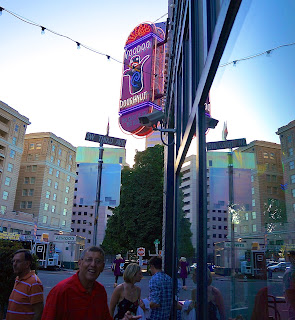