Charity Begins with a Book: 10 STEPS to Finding Your HAPPY PLACE (and Staying There)

"You will find it hard to keep yourself from smiling as you read through this enjoyable guide. Indeed, happiness may unsuspectedly sneak right in."
--Sandra Pawula, AlwaysWellWithin.com

Do you remember the the Nunchucks Nana?  She was a guest blogger here last April. Her pen name is Galen Pearl but I called her the Nunchucks Nana because she earned a black belt in Taekwondo in her sixties and her guest post was related to that experience.

Now Galen Pearl has written a book called 10 Steps to Finding Your Happy Place (and Staying There). The book is the result of 3+ years of writing a very popular blog by the same name. I am one of her many followers. Each story carries a lesson. The fact that she is a single mother that has raised 5 children should be enough to fill many books. The journey has not been easy. She has raised two autistic sons and three beautiful daughters while working at a career as a college professor. Many of the story lessons are related to those experience.

When a person is given the gift of words that speak to the soul, I stand in awe. Her thoughts resonate as she writes about personal anecdotes and the lessons they have taught her. The 10 Steps to Happiness come alive as she talks about her life stories and how they are related to the tenets she sets forth.

I think any parent or grandparent could relate to Galen Pearl's advise. In one chapter she told about her daughter Mia's impulse to quit because she had discovered that learning to playing lacrosse was hard. "I quit!" is not something any mother or grandmother for that matter wants to hear from the children. I loved the idea that she didn't make her daughter feel like a failure because she wanted to quit or even talk about how hard it was to begin a new adventure. Best of all, she didn't give her daughter the age old lecture on the evils of quitting. She focused on the tiny steps it can take to accomplish something as daunting a learning to play a new sport. Galen wrote: 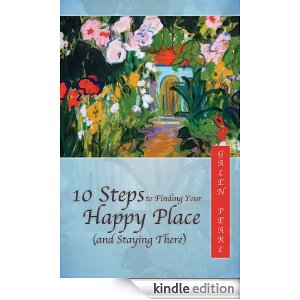 My daughter Mia is a natural athlete.  She played basketball during her growing up years.  She played during the season on her school team and during the off-season in hoop clubs. Then in high school she wanted to switch to a new sport, lacrosse.  But when she came home from the first practice, she announced that she was going to quit. When I asked her why, she said in frustration, "I don't know how to play."

I casually asked her how long she had been playing lacrosse.

She frowned and snorted in exasperation. "Two hours."

"Well," I suggested, "why don't you play two more hours before you decide."

Another story told about an an early lesson she learned about the value of fun from a professional who was helping her deal with summer vacations spent with her autistic son. She saw those summers as a time for getting things done and making progress in helping her son work through his challenges. She wrote:

One spring I was talking to James's developmental psychologist.  We were going over several options for James's summer. One option I dismissed quickly by saying, "That one would just be fun." The doctor leaned forward until he was sure he had eye contact and I was paying attention. Then he said slowly and deliberately, "Fun...is...good."

I guess all those years of training paid off for him [the psychologist], because that was one of the smartest things I ever heard.

The Author
As a young person, Galen Pearl was a hippie searching for meaning in her life. She fished for salmon in Alaskan waters and hitch hiked her way to South American...all before she earned her degree in law. In the years since she has been a world traveler, an expat working as a lawyer abroad, an educator, and now a retired law professor. She teaches workshops sharing her inspirations. But she is first and foremost the single mother of those 5 adopted children.

I connected with her this last summer when a fellow blogger, Bob Lowry, came to Portland for a visit. We visited over tea to make plans for Bob's visit.  She invited me to sit in the living room of her beautiful little house in the Irvington Historic Neighborhood here in Portland. The only reason I even mention the location is because it speaks to the remarkable woman she is. The Irvington neighborhood is very old with lovely gracious houses. Trees push their wild roots several feet above the sidewalks and the houses that line the street speak to an age that is all but forgotten. Gracious is the word I would use to describe Galen Pearl. The little house was home to her 5 children and now two grandchildren visit. She says it is home and that is where she decided to stay even as her family grew.

So I am sure your will understand why most of that first visit was spent talking about our families and shared experiences. She has that way of drawing people into her life when they least expect it. I feel so privileged to have become her friend and I love being able to share this book with you because I have seen and experienced her wisdom first hand.

Why this book now?
But I think the real story here is the WHY. You see Galen has dedicated this book to the Edwards Center here in Portland and all of the proceeds from the sales of the book will go to that cause. The center provides residential and vocational services to adults with developmental disabilities. Her two sons both are residents in the center. She is not only a source of financial help for this non-profit but she also devotes time to developing facilities for the organization. She has not slowed her life in retirement and continues to be an asset to her community.

When I attended the open house for launching 10 Steps to Finding Your Happy Place (and Staying There) in Galen Pearl's home, I found that her publisher, editor, children, grandchildren, and a multitude of friends along with their children had come to help her celebrate. She raised $1000 for the Edwards Center on that afternoon. Now I am hoping that her book will bring not only more money in but also lead the readers to allow themselves to find their "happy place". As she points out, happiness is not something you find out there in the world...it is the way you live. It is "like finding your glasses on top of your head, you wake up and realize that your happiness was here all along." You have to love her words!

The book is available on Amazon in the printed version

(my preference) or in the Kindle version

Amazon Author Biography: Galen Pearl's stories have appeared in Chicken Soup for the Soul and A Cup of Comfort anthologies, and her popular blog, 10 Steps to Finding Your Happy Place (and Staying There), attracts thousands of readers every month. Recently retired from teaching law, she regularly leads retreats and workshops on developing habits to grow a joyful spirit. A Southern girl transplanted to the Pacific Northwest, she enjoys her five kids and two grandchildren, martial arts, her cabin in the mountains, and mahjong.