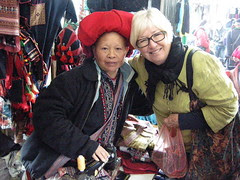 Sapa Vietnam(Photo credit: Always at Home)
Travel is a passion and I love to talk about it, write about it and listen or read or watch movies about it. I once wrote in a journal about the need to travel.  It was in 2004. (I was 62...which proves it is never to late or early to be a beginner.) I said:

If I were not traveling I think I would die from itching feet. My feet may bleed from the coarse sand and ill fitting shoes but at least they do not itch and I do not die.  I grow callouses that make me strong and even taller.  I seem to become smarter from the bottom up.

This entry was written while my husband and I were traveling in Thailand with our son, his wife and our 16 month old granddaughter. The granddaughter is 9 now and we have been to the far east several times since that time. But the memories from our first trip are still alive. What I remember more than anything else was the feeling of being a beginning traveler. The first time in the Orient was wonderful and hard at the same time. I continue to learn about traveling abroad.

If you are a beginning traveler, I think you can benefit from several things I have learned. I cannot give you the smells or the emotional experience, not in person.  But what I think you can learn from books and movies will help you a lot.

Lesson # 1: Different is a GOOD THING!
The latest and greatest destinations are usually third world countries. There are still deal to be had and the people have not learned to dislike tourist...yet. I read on a travel site the other day about the two sides of places we will visit. There is the resort experience...the one where we go to a country like Thailand, stay in a resort, and leave with a sun tan but no knowledge about the country itself. Or we can stay in a hotel, wander out for lunch or dinner and experience the people of the country. It is our choice.

The thing is, if you go out into the country you will not find what you have at home. If you have never been in a third world country where a small percentage of the citizens are very rich and the rest are not, it is a shock.

The experience of seeing people living at or below what you consider the poverty level may make you uneasy. The reason you will feel that way is because you are basing your judgement on your countries standards. I have learned that material possessions are not even possible for a lot of people in the world. They do not miss what they do not know. They live very frugally and are happy. I envy them that life.

Here is what I suggest you do. Rent a movie! Of all the videos I have ever seen, the one that hit the perfect balance was The No. 1 Ladies' Detective Agency (Pilot

written by Alexander McCall are wonderful to read but the HBO series based on the books give the viewer a feel for the joy and simplicity of life in a place that is not all about Internet service and TV. The experience is about the people and their dress, culture, and music. After watching the series and reading several of the books, I want to visit Botswana. I think I would like it.

The No. 1 Ladies' Detective Agency is a television series, produced by the BBC in conjunction with HBO, and based on the novels of the same name by Alexander McCall Smith. The novels focus on the story of a detective agency opened by Mma Ramotswe and her courtship with the mechanic Mr. JLB Matekoni. The series was filmed on location in Botswana and was seen as one of the first major film or television productions to be undertaken in Botswana. (The Gods Must Be Crazy, a 1980 film set in Botswana was filmed mainly in South Africa. (Wikipedia)

Even if you are traveling in the United States you will find "third world" conditions or cultures you do not understand. Be respectful and listen. You may just learn something.

Less # 2: Find the Place that Calls Your Name
The world is your oyster...the whole big wide world. Oh my gosh what will I do first? When we retired, the "oyster" was like a big giant elephant demanding to be eaten NOW! I know we both had to take a big deep breath and step back. Remember, you eat an elephant one-bite-at-a-time. I think a list is good. Keep in mind expenses, time and dreams. In other words do what you dream of on what you can afford and the time you can stand to be away from home. It is as simple as that.

Lonely Planet suggested several movies that are available no.  They give you glimpses of various regions in China. The article called Silver screen China: a movie buff’s travel guide refers to movies shot in locations throughout China. Because I travel in China I was very interested in this article. Getting a visual picture of the places even helps me make my choices.

Lonely Planet forum has conversations about The Da Vinci Code

and how that movie prompted people to take a trip to the movie scene locations. I even wrote an article about the movies that had been filmed in Tucson, AZ. For those of you that are a Lord of the Rings fans, the images of New Zealand may even lead you to visit that country. Incidentally, I see that New Zealand has restored the movie set for tourist that visit from around the world.

Lesson #3: Review the Etiquette of Travel
Here is the deal. You need to remember that the movies can give you images of a country but people are people. I don't know about you but learning about people is why I travel. So you really, really must read The Accidental Tourist

by Ann Tyler. If you are one of those people that think that all those people out there that do not look like you or eat like you or worship like you are evil, you need to get over that. The Accidental Tourist is about a man that writes how-to books for people that travel but don't want to ever taste or smell the country. It might help stop you from being an "ugly American". Even Mark Twain wrote about the traveler that would not give up the idea of superiority when they traveled. The Innocents Abroad is a wonderful book and still is valid even after all this time.

Conclusion
I remember the first time I had ever been in Washington, DC.  The sights were so familiar and it was a amazing that I actually felt very at home in a place so unlike anything I had ever experienced before. The reason?  Our nation's capital is in the news every night. The images were ones I had seen hundreds of time. I had read history and novels placed in the capital. It was like home because I knew and understood it even though I had never been there. That is what movies and books can do for you.

So that is what was on my mind today.  Send me an email if you have a question or leave a comment.  I would love to hear your thoughts!

finally i saw that worrying had come to nother. and gave it up. and took my old body and went out into the moring and sang.