Wouldn't it be wonderful if I could amaze and delight you everytime I wrote a post? I mean the kind of stuff that makes you go WOW, she is really good! All I have to offer you today are some very good books I read in 2014 with just a short description of each. Take a quick peek at them and then tell me what you have been reading.

This past summer I read Cleopatra: A Life

by Stacy Schiff. Cleopatra was such an elusive subject that Schiff had to depend on history written several hundred years after she had died. No painted image of her remains nor does any of her words. And yet the author managed to capture a queen that could have been alive during the time of Christ, the richest and most powerful ruler of her time even though she is hidden from view. 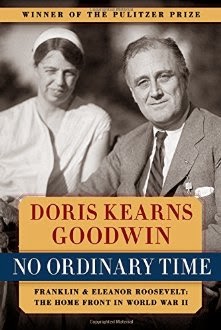 Now I am in the process of reading No Ordinary Time: Franklin and Eleanor Roosevelt: The Home Front in World War II

by Doris Kearns Goodwin. This is no an ordinary book in anyway shape or form. Goodwin relates the story of the Roosevelt relationship in all it folds with such detail that I feel as though I am living through that period of time myself. I went to bed last night so angry because I had just read about how an anti-Semitic official in Washington during WWII made it all but impossible for the Jewish people to escape Europe and come to the USA. Isn't it interesting that we see the answers perfectly in hindsight. The discussion of social issues prompted by a book like this can be nothing but a good thing.

But I also read a book called The Power of the Dog : A Novel

by Thomas Savage. I can't remember how I found this book but it is a jewel. As I remember it was written back in 1967 before the homosexuality was widely discussed. Even though it received rave reviews it did not sell at that time. It was re-released in 2001 and Annie Proulx wrote the Forward for the later edition. I was reminded of a Pulitzer Prize winning book by Allen Drury called Advice and Consent

My granddaughter insisted I read The Fault in Our Stars

by John Green. It was a delightfully written sad and telling book about how teenager's continue to live and love even though they are dying with terminal illness. Teen books have emerged as a very interesting genre of books I think. I remember hating the dummy down books we were fed and went directly to the grown-up section of any book store I was ever privileged to enter. Green told this story with such good taste and sympathy.

So what have you been reading?

Email ThisBlogThis!Share to TwitterShare to FacebookShare to Pinterest
Labels: Best of 2014, Book