Travel Oregon Highway 66 Back to the 70's

Here in Southern Oregon there is a subset of our culture that invites a closer look. In the days when hippies wandered the woods living secluded lives that only required a garden and a few marijuana plants, a revolution began. The interesting thing is it has never really ended. Some of the people that live in this part of our country still are living the dream. Even though Marijuana will be legal here in Oregon soon and use of the drug or even growing it has lost it's rebellious connotation, the feeling is still all about freedom and rebellion in the Siskiyou Mountain forest.

We stayed in a lodge in the Siskiyou Mt. near Ashland Oregon called Green Spring Inn and Cabins on our trip home from Arizona. Our cute room fit the description of a boutique hotel room. The old lodge has been refitted with very good beds and wonderful amenities. But it was as I sat with my husband in the restaurant that I had that feeling...you know the one where you wonder where you are and what decade is it. 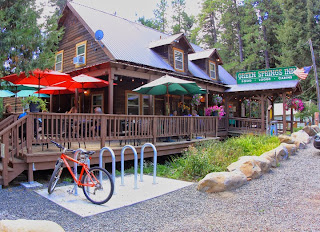 Even though the place is remote, the restaurant filled with people. A group of younger people straggled in looking like something out of the tie-dyed hippie era. Dreadlocks, army fatigues, combat boots paired with a skirt on the girl and denim or flannel shirts on the guys screamed look at me. One man looked twitchy and the others just were there. The four of them eventually gathered at a table in the back room. As far as I could see they had a pitcher of water and a cup of coffee.

The diners, most of them our age, didn't even look up.

Behind me an older woman sat with two younger "boys".  The boys had turned down the beer because they "worked for the sheriff" and were underage. The treesome left after a short conversation about "cooking", making an extra $50,000 a year and marijuana. A whole gallon pitcher of beer was left behind on the table. What a waste. I was so surprised as the whole evening played out that I could not even figure out what had really happened. Did I dream all of that stuff? And if I didn't, wasn't there someone that made sure these people were okay? Seriously, it was almost otherworldly.

Yet, we were served very good food reminiscent of an upscale restaurant in Portland. The place looked like something out of a picture book featuring small town cafes. One of the hotel's claims to fame is a flock of friendly chickens that inhabit the grounds. There is a reservoir close by and trails lead away from the room into the woods.

And the people...where did they come from. Honestly, it was not easy getting there and yet the place was full to the gunnels. In fact, the lodge is located just a short distance from the Pacific Crest Trail that runs from British Columbia south to heaven knows where. It was the summit of the mountains on this road. I think they were sold out that evening.

I just had a sense of being lost in another world. But then that is the way southern Oregon is. It truly is a separate world all unto itself. If you want to take a very interesting "road trip" try Highway 66 between Ashland and Medford. Stay at the Green Spring Inn and Cabins and above all have dinner on Friday at their restaurant. I don't think you will be disappointed.