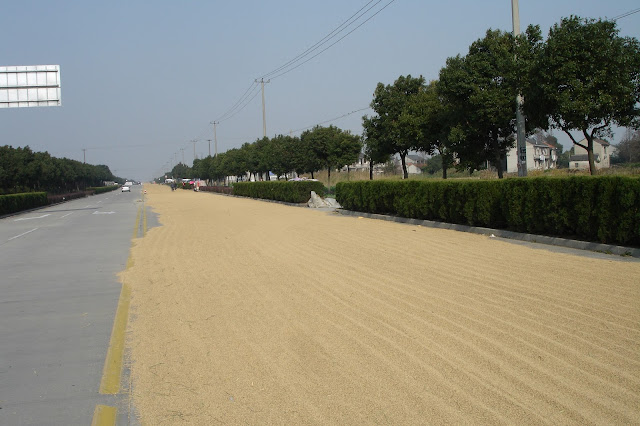 We just returned from Arizona and are now at home in Oregon. Our trip this year took us through the center of California where much of the produce we find on our tables is grown. Rice is one of those crops that somehow seems out of place and yet there it is.
Growing rice really is a mystery to me. The rice that is grown in water to hold the stalks up (I am told) and is planted April. In the Yangtze Valley of China where the crop is harvested in October, the streets and highways are used to dry the harvest. Even in the middle of the villages rice is spread in the middle of the streets by the "people" to dry. It is not called the People's Republic of China without reason.
For those of us that have driven through California where large processing plants take care of the drying rice and machines plant that same rice in flooded paddies, it was a surprise when we come to a very wide road that cannot be driven on this week because the "people" are drying their rice crops. Really!
Shanghai is very near sea level so there are canals everywhere and people live on the banks, grow crops in the borrow pits along side the road that are raised using the soils taken from the pits. The pits also fill with water. Is it understandable that a crop like rice would be a perfect one for the region.
The natural order of thing was foreign to us too. The "people" were totally in control of the roads in these small villages and would not even acknowledge the cars at all. It takes a certain amount of getting used to and patience.
I saw children playing in the areas between freeway off ramps in Beijing. Parents kept watch but open ground was at an a premium and the "people" do not hesitate to use what was going to waste.
The infrastructure in the rural areas was not perfect and people keep warm using charcoal. A single light bulb that lights the center of the house might be a luxury for all I know. Children live in layers of quilting in the winter and resemble balls with legs. Their pants have a slit in the crotch so they can squat to go to the bathroom when the notion strikes them. Nothing is so private that a child cannot go potty anywhere.
Growing rice was the symbol for what I didn't understand totally. There was much to be learned and not nearly enough time. We were there last in 2011. China was growing up at that time but the simplicity for those living outside the cities was still very much on parade. I wonder what I would find now?

I love travel so much. It seems that the experience follow me home. And I love to talk about it...not because anyone is interested but because it brings back such good memories.

Thank you for reading.