I continue to learn. As we travel, the rules we encounter are different yet the same. It is just a matter of filling in the blanks. If you have ever traveled, you will understand.

For example, we know that we should always keep a pair of underwear and your pills close to you. Even though this is an unwritten amen rule, we still  returned to Tucson and not one piece of luggage followed us. We had checked everything so there was no underwear or pills. Thankfully, we have a spare of most things here but my husband's pills did not turn out to be one of those things. We were in bed the next night when the luggage was finally was delivered.


I will have to admit that being in the Middle East does change some of the rules. We learned that you mustn't touch or hug your spouse in a mosque. It is forbidden.

We visited the Grand Mosque in Abu Dhabi. As we walked through that opulent and beautiful structure, we took pictures of ourselves with our arms around the waist. We were asked to discontinue that gesture by guards monitoring the behavior of tourists that were allowed to visit. My daughter-in-law and I were also give abiyahs to wear while on the grounds. I will admit though that even if we were not required to cover ourselves, I would have done so. I do not think it is silly. It is a cultural belief and I respect that. When in Rome you know. 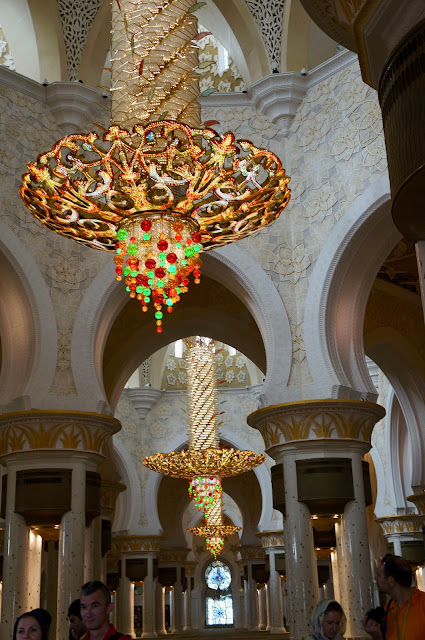 We traveled to Jordan for 4 days. It had been warm and beautiful in Dubai and we were very surprised to find out that the temperature in Jordan would be very near freezing, particularly when you traveled through the mountains. So I am telling you, remember that the Middle East is not always warm.
As all experienced travelers know, you can get by in cold weather even with hot weather clothing. The secret is to just put them all on at once. You will be just fine. Sweat shirts are available almost everywhere in the world...buy one right away.
Remember that the people in the Middle East are a bit like the dromedaries that inhabit their land...they NEVER need a bathroom. Prepare for that. We flew on Royal Jordanian round trip. The plane was filled with Jordanians going both way. I think I was the only person on the plane to use the facilities more than once. We were in the air for well over 9 hours. It was very surprising! 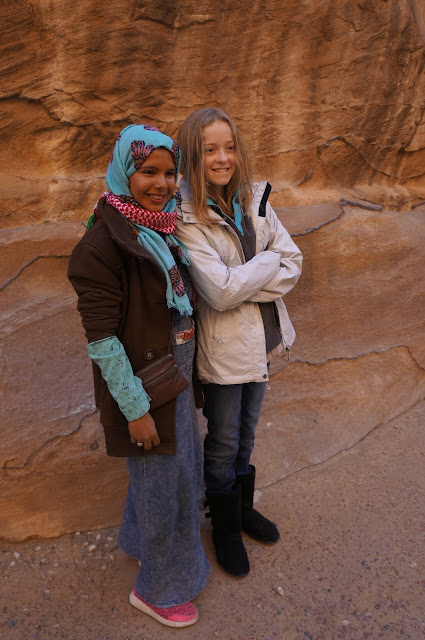 Everywhere we go children are selling postcards or chicklets or something. Every country tells you to not support that practice because the parents are taking advantage of their children. We have all had experience with the practice.
Still, these are children, real children with sweet smiles and warm hearts. I cannot be mean to them. We encounter this lovely young lady while walking through Petra in Jordan. When I asked her why she wasn't in school, she told me it was a holiday. (It really was.) She was 13, the same age as my granddaughter. There was a sweet connection and we photographed her with Maddie. We all knew her life was hard but she was the one that lifted us up, not the other way around.
Always be kind.


In Jordan, Petra was one of the most amazing natural wonders I have ever seen. It sits in an ancient place where humanity lived and prospered and has survived the onslaught of tourist that walk through almost everyday of the year. My feeling was that it is not Muslim nor is it Jewish or Christian. It just is. Much like the Jordan we visited, it is a place where the old stories began and, even though those of in the West think we own those stories, they do truly belong to the Jordanian people. We only skimmed the surface but even that little bit of insight has truly changed the way I see the region.

We were told by our driver that the government takes care of it's own people. It was very expensive for us but the locals manage just fine. The average wage for it's people is around $400 (dinars perhaps) a year. The herders and tribe member are supported in this culture so they continue to work and don't abandon their family history. Lower level education is free for everyone and college is free for many. Nothing is fancy but everything seemed to be cared for.

There is no where on the face of this earth that is completely safe. There never has been. We are well aware of what is going on around us even here in Tucson. Jordan is no different. The little country is rocky and caught between other rocky places. As we traveled with our taxi drivers, we were stopped many times at checkpoints. Soldiers were surprised that American would be traveling through the countryside. Hotel entrances had pillars that retracted into the ground to keep them safe. Soldiers stood at intersections in Amman and submachine guns were mounted on the back of trucks. Did we feel afraid? Never. Life goes on. I do realize that one day something might happen that scares us a lot but until then we are just careful.
Dubai
Dubai remains a wonderful reinvented place. The country has turned this very dry and sandy place into an other-worldly city. The tallest building in the world, Burj Khalifa, is so tall that when we traveled up to the observation deck (not the top at all) our photos came out looking as though we were flying over the city.
Resorts in 5 star hotels provide stunning views of the Arabian Gulf and golf courses brag about world class designers and professional golf tournaments.
And surrounding all this is a population of expats living in designed communities and working at well paying jobs. Servants and service employees are imported from Pakistan, India and Far Eastern locations. Superhighways that spring up with amazing speed are traffic jams at quitting time. This is in a country that did not even exist until 1971.
We visit our son and his family when we go to the country. They live in what the country calls "affordable" housing that rents for around $50,000 per year. The designed community has it's own grocery, restaurants, hardware store etc.
We walked to the store daily. A neighborhood pool serves the residence and includes a life guard that also enforces Islamic law...no playing cards (gambling) and things like that. Westerners don't pay much attention unless there is a rule that might cost a fine if broken. It is very safe and peaceful for the most part.
I have so many more pictures and stories but that is all for today. Enough is enough!
Have a wonderful week.
b+