That One Day When Travel Surprised Me Again


We often travel without a plan. Life seems to happen to us without any prompting and we find what we really like and are not unhappy for what we did not see. We like it that way. It is all about the surprises in life.

This trip to Santa Fe comes four years after our last. It was my birthday so it was a celebration of sorts. We ate authentic New Mexico food, visited Canyon Road and the Georgia O'Keeffe Museum. We ate at the Plaza Cafe for breakfast (a must).We shopped from the Native American artists that sell their wares in front of the Palace of Governor's.
Those artists are chosen by lottery so the person you see today will not be back tomorrow. Every item must be hand made...no manufacturing of any kind can happen.  One does not get to "think it over". I like that too. I am always surprised by what we find. 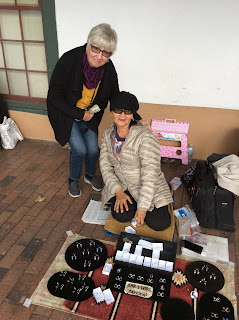 On the way to and from Santa Fe we found new gems and missed some old ones. Hatch NM did not have the chiles drying on the roof or in the street this year. But they did have some beautiful pottery from Mexico.

We found a restaurant in Deming, NM on our way home called Elsa's House of Pies & Restaurant. The food was good old fashions southern home cooking. The very small space was located in the alley beside the Well Fargo Bank parking lot! It was a surprise to say the least.

Out of all the wonders this trip brought, it was the totally unexpected event that happened at the The Museum of Art and Culture on Museum Hill south east of the city center. As we arrived, a crowd was gathering and a crowd of Native Americans and locals were walking up the hill toward the center piece of that complex. Native drummers were practicing in the parking lot. It was there we happened onto a ceremony for the unveiling of a statue of Valentino Tzigiwhaeno Rivera. Valentina was the son of a former New Mexico governor, George M. Rivera and a famous hoop dancer that performed around the world. His father is a renowned artist and created the bronze sculpture as a way of healing.

Valentino was injured in a car accident in 2015 that took his life 14 month later. He was 8 years old at the time of his death. 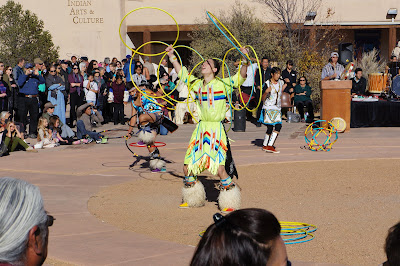 Performers from dance troupes called the Lightning Boy Dancers, some very small and other's teens that contend in the World championship competition held in Phoenix each year. Tzigiwhaeno was Valentino's Native American name and meant "lightning". The group is lead by a world champion hoop dancer and named is sponsored by the Lightning Boy Foundation formed in Valentino's memory. His mother, Felicia Rosacker-Rivera, leads that foundation.
We were very fortunate to witness the whole event from the speeches to the unveiling of the beautiful sculpture to the hoop dances dedicated to Valentino's memories. It was a remarkable though heart wrenching thing to see. That little boy was a gift and a wonder.

We spent 4 nights in the area and never stopped to wonder what we were going  to do. The more we come to Santa Fe the more I want to go back. And on this trip..life happened to us again. I suppose we shouldn't even be surprised after almost 57 years of marriage.

What was your big surprise lately? :)

Thank you for stopping by and have a wonderful day.