Did I Really Say that?

This is an updated post from 2014. It keeps getting better and better!

I have to admit it. I can swear but I try to keep it a secret. I am a total fraud and Google knows it. I found that out after I wrote this article. Now I find out that Dame Judith Dench thinks my choice of words shows courage. Plus Rubber Shoes in Hell is not setting a good example for me. Wow! 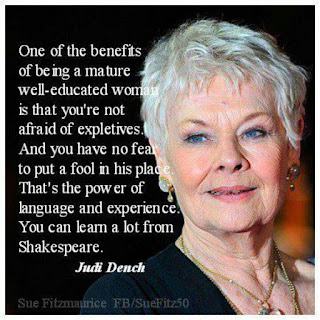 I know, the word cussing is old fashioned but just work with me here. Cussing is what we called it back in the day. In fact, cussed (cuss-said) was a swear word back then. We would call mean old men those cussed old guys or a dog that bit that cussed dog.

I didn't hear many really bad words in my day. My mother said dang once in a while. But I must have heard some bad words somewhere. My mother claimed I said dammit over and over while I jumped up and down on the bed. I was in trouble for jumping and cussing. It was not a good day in my world. Then I claimed that my Auntie Ardella said it all the time. My Auntie was a saint and I am sure she never used a bad word in her entire life. I probably was guilty of lying too. I don't remember doing any of that very clearly.

My father always cussed in the basement when he hit his thumb with a hammer or cut a board too short twice. However, he was out of earshot at least as far as understanding the words were concerned. I did hear him call his bosses SOBs a time or two but since I could not spell it didn't matter.  That was as bad as it got. I don't think he would have been a "real man" back in those days if he had  not done that.

I was a teacher and the "f" word was never allowed. Student would be surprised when the parents were called but still, they did get a call. I can understand why they needed to spout off occasionally. But still.

I discovered that sometime things went wrong, I was frustrated. That was when I learned a few bad words...fiddlesticks, dog-gone-it, shoot, phooey and later what in the Sam Hill?

I always felt a little guilty when I lost control but lose control I did! And my vocabulary became more colorful as time passed. I have spent a lifetime trying to overcome this very bad habit.  But, a bad word or phrase will slip out in normal everyday conversation. I am generally on the golf course. Dear me, I sound like a sailor or a person that was raised by wolves.

Now Dame Judith Dench, age 80+ says that maturity gives us the courage to say what is on our mind. Interesting I think. I'm not sure if it is courage or lack of self control. Sigh!

As I age I want to become more of a lady not less. I really do. I think that dignity and modeling of good manners never goes out of style.  Oh My (smile) how I wish it were easy. But it is not.

I tell myself often that I do NOT suffer from a disorder that leaves me unable to control my language. I cannot decide if I should fight it or just embrace it. After all, if Judith says it is okay, who am I to disagree.

Unfortunately Google sees right through me. I was a little taken aback when I saw that they suggested f*__k as a label option.