The Birth of the Illegal Immigrant + Were They Joking About that Wall?

Do you ever wonder HOW DID THIS HAPPEN? Is it a very bad joke gone wrong? First the KKK, then a very big wall.

AND...when did taking children away from parents and holding them hostage become a way of getting legislation passed?

As it turns out, determent camps are looking better and better. At least children were not taken away from their parents when German, Japanese and Italian people were held in such places during WWII.

As I understand it, our mess started with our president being easily bored. His mind is going a mile a minute so staying on the subject is hard. I understand how that is.

I question the idea than anyone was serious about building a wall when it first came up. I think that it was during one of those squirrelly hyper active moments that Trump jumped from another subject to illegal Mexicans and their drugs and guns that someone in his group suggested that we could just build a really high wall between around the USA. They were, I have read, simply trying to get him to focus. Is this true? Did that happen. But most importantly...could they have been just joking, easing the tension? Maybe.


In the end it doesn't really matter. The nonsense ship has sailed. Even John Kelly said that "that some of President Donald Trump’s campaign promises on immigration were 'uninformed.'" But we will say one thing for Trump, he does keep a campaign promise, even a very bad one.

What a mess this has left us with! Honestly!

Our unwanted and hated immigrants have been a problem since the USA actually became a independent nation. Those that arrived early resented the Irish, the Catholics and then the Chinese. A law was passed in 1884 call the Chinese Exclusion Act. It was our first Federal immigration law.

If you are interested, you can go to places like Pendleton, Oregon and find how those Chinese people lived under the sidewalks in underground villages in order to survive. I have been there and seen what that was like.

As history shows us, the more we tried to block legal entry into the USA, the worse illegal entry has became. This gave rise to some vicious and illegal practices by government officials.  I give you Joe Arpaio of Arizona. His tent cities for illegals gained national attention as inhumane and he was ordered to quit racial profiling of Hispanics by the courts.  He was convicted of a ignoring that order in 2017. Trump pardoned him shortly thereafter.

As I was saying, that Chinese exclusion act was revised and became the 1924 Immigration Act introduced quotas that gave preference to northern and western Europe and only allowed only those who could become a naturalized citizen as defined by a law that dates back to 1790. Then that ugly law reared it's head again just lately:

Our Attorney General, Jefferson Sessions ".... stated that the 1924 Immigration Act “was good for America.”

But according to Mae M. Ngai, a professor of Asian American studies and history at Columbia University, “the 1924 act is considered almost universally to be a stain on our history.” 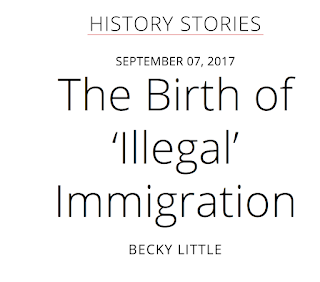 History Channel has a very good article on the subject called The Birth of "Illegal" Immigration. In that article they referred to the Hart-Celler Immigration Act put into law in the mid 1960s.

Prior to this, Mexican immigrants freely, and commonly, found work in the United States. Yet after the Hart-Celler Immigration Act was passed, “Whole groups of migrants from Mexico and Latin America whose entrance to the U.S. would have been considered legal before 1965 suddenly became illegal,” writes Jane Hong, a history professor at Occidental College, in The L.A. Times.

By ignoring the realities of migration between Mexico and the U.S., the law created a problem where there was none before. And this idea that the United States can radically alter immigrants’ legal status, for good or ill, has implications for today.

I am not here to comment on what Trump is doing. I am not into the right or the wrong of it.

However, I want to tell you something.

Most Rohingya Muslims illegally entered India. And slowly some political parties helped in providing them with papers.

Despite living in refugee camps they have not stopped having babies. In an average each family has more than 8 kids and pregnant wives. Each day 60 kids are born.

They want all kinds of facilities from the Govt of India. They don't wish to be deported to Myanmar from where they arrived or to Bangladesh, their country of Origin.

When India talks of deporting, so called Human Rights activists cry foul. Why should we share our resources with refugees who are breeding like rabbits?
What is the solution?

This Facebook post reminded me that people migrating around the world, trying to find some sort of life is so common. The children that the Facebook user talked about is one of our problems too. "Breeding like rabbits" is not a good idea. That is the other side of the immigration coin...illegal immigrants could be using their children to gain sympathy so they can get what they want.

Who knows where this is going! But I still wonder, is this wall idea a joke gone bad. Did the president of our country latch onto unwanted immigrants as a flash point so that the people that followed him would like him more...hatred...it doesn't really matter who the hatred is against. He just needed someone for them to  hate.