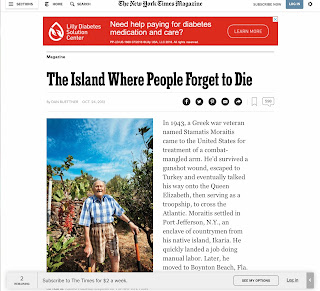 ...you. did not know how old you are? Good question don’t you think. In my age group the conversation often turns to aging, old age or an "organ recital" (you know, a conversation about how your bodily parts are working).

Is that normal? Do we often talk about some malady because that issue is one expected of a person in our age group? Do 30 year old people do the same thing about tiny wrinkles around the eyes or the loss of athletic power? I suppose so.

As a result, I often wonder how we arrive at the determination for how old we should be. Do we derive that image in our minds because of where we are raised or who we associate with? I wonder.

In at article written for the New York Times back in 2012 called "The Island Where People Forgot to Die" the author, Dan Buettner, talks about a Greek Island where men live to an astonishingly old age ( 90, 100, and older). He relates a story about how something on that island and in other places around the world happens to humans and they simply "forget to die". Buettner was writing for National Geographic at that time. The team he was working with had discovered the phenomenon of "The Blue Zone".  I was amazed by the whole story. Note: In San Diego, California Seventh Day Adventist women have a very long life span. That area is another Blue Zone studied by National Geographic.

It seems that the life style and food is entirely doable. They get up when they want, take a nap if they feel like it, work, play, drink wine (even with breakfast) and most importantly visit with neighbor in the evening almost everyday. Is that the secret? No one knows. But the truth is they are very happy content people for the most part.

I think it could be that they live so long because they forget about age. I think that the lesson here is that it really doesn’t matter how old we are or how long we live. If we are miserable and unhappy we might not live as long but it will seem that like forever. If we are happy, we might live forever but it will pass in a flash. We may simply forget to die because we have things to do.

So when I read the story about that island called Ikaria, Greece situated on the Aegean Sea my measuring stick changed. What if I do live to be 95 or 102. The island could be calling not only me name but yours too.

When I read that article, I realized how much of our life we waste waiting. Thought crossed my mind that, if I lived to be 100 for example, I had a lot of time left to do things. I actually could do some of those things that I have dreamed of or I could create new dreams and do those. I felt, well, younger somehow. The perspective was different.

So, how old would you be if you did not know how old you were? Interesting huh!