Are You Going to Hell?

Note: I have decided to unfriend or block friends on Facebook because of their political beliefs. It is a very unliberal thing to do I know. I don’t know how to have a conversation in a world with so much hatred. Am I going to hell? Maybe. We will see. Here is the story.

I had an interesting exchange with a Facebook follower. She and I have known each other for many years. We played golf together in Oregon. We sat together with the same group for lunch and had conversations revolving around stuff that had nothing to do with life or politics.

After this last election I began to see that she was as out spoken and firm in her beliefs as I was and we did no agree. But, I also saw that even though we are different, we truly do want the same things. Our differences are in how we go about getting to a good place. And our tolerance for those that disagree with our beliefs are tenuous to say the least.

Recently I shared a quote made by our new congresswoman Alexandria Ocasio-Ortiz. Ms. Ortiz is probably a socialist and her group of supporters may have the idea of taking down everything to build a new society in the United States. It is very appealing to them. Maybe they have nothing to lose...who knows. I JUST THOUGHT IT WAS INTERESTING. I DID NOT INTEND IT TO BE A THREAT TO ANYONE’s BELIEFS. 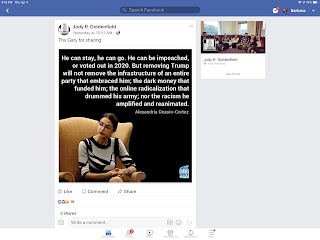 But I digress...the part of Ms. Ocasio-Ortiz’s statement that touched a nerve with my Facebook follower was the part about "dark money". I really don’t understand what that is all about because in my world illegal is illegal no matter who you are. Two wrongs do not make either party right.

"What is George Soros funding?" she asked. I did not know so I looked this man up.

This is what Wikipedia said about Soros (including footnotes):

Soros is a well-known supporter of progressive and liberal political causes, to which he dispenses donations through his foundation, the Open Society Foundations.[15] Between 1979 and 2011, he donated more than $11 billion to various philanthropic causes;[16][17] by 2017, his donations "on civil initiatives to reduce poverty and increase transparency, and on scholarships and universities around the world" totaled $12 billion.[18] He influenced the collapse of communism in Eastern Europe in the late 1980s and early 1990s,[19] and provided one of Europe’s largest higher education endowments to the Central European University in his Hungarian hometown.[20] His extensive funding of political causes has made him a "bugaboo of European nationalists".[21] Numerous American conservatives have promoted false claims that characterize Soros as a singularly dangerous "puppetmaster" behind a variety of alleged global plots, with The New York Times reporting that by 2018 these claims had "moved from the fringes to the mainstream" of Republican politics.[22][23][24][25][26]

Please note that he helped bring down communism in Eastern Europe and supports education through a foundation. HOWEVER, when I went to check on this foundation I found it was private, unrated and indeed called "the least transparent" of all those around by some groups. Here is another incident where you really can’t believe Fox or The Daily Kos because they, like the rest of us, DO NOT KNOW!

I am all about taking the middle road...now days it is not the road traveled the most obviously because the question that came back at me was "What is the middle? Do you know?" I interpreted that to be an honest question, not sarcasm. PBS or BBC seems to be the one that comes to mind.

But, in this day and age where my Republican friends (and yes I do have those) cannot even talk with me about our world, I am very careful. I love my friends a great deal.

So, the beat goes on. Do you think we can survive another 4 years of what we have now? I do but it will not be fun for anyone because that place in peoples mind that tell them that they are right and those that don’t agree are going to hell is a very frightening place to be at least for me.
What do you think?