What Do You Think? The mentally ill are dancing in the square! 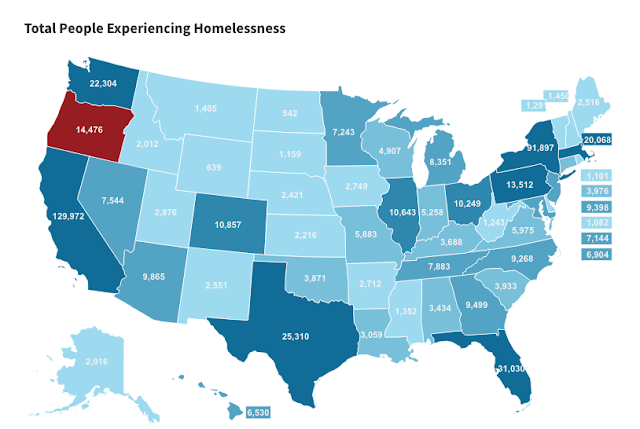 Here in Arizona where the sun shines and the climate is perfect for someone living without a home, the homeless are invisible. In 2018 there were almost 10,000 people without homes in the state. Yet there is no sign of them here in Tucson. What is Arizona doing that is different? Where are those people?

We all know about that time between sleep and awake...that extra few minutes of sleep that we all seem to crave. That is the time when I solve all of the troubles in this world. This morning it was homelessness that came to my mind.

I suppose that every citizen of Oregon has that same dream/nightmare. We are not afraid of being homeless. We are afraid that our state will become unlivable because the homeless are actually becoming more and more a visible problem. They live on the city streets, in the parks and even on the space between the freeway and private property. They are the visible homeless living in unsanitary awful conditions. Many are mentally ill.

Human feces can be found as well as garbage, tents and all those things that humans need to survive...on the streets in front of Nordstroms etc. It is so sad and, I think, inhumane to even allow our citizens to live like that. Children are even in tow. Teens run away and join the mass. The mentally ill dance in the square.

There has not been an outbreak of disease but it is looming on the horizon.

Portland has tried a number of measures but it would appear that nothing is working. In reality everyone has a solution and no one can agree on which way to turn. And, the truth is the problem is very like a toothpaste tube. The minute the group is pushed out they simply appear somewhere else. Going away totally is simply not possible.

Our city is very rich in so many ways. But as a result rent is very high and there is no rent control. If the state were to take on providing low rent housing it would need a whole community bigger than most of those in the state.

Back in the day there were poor houses and group homes for the mentally ill. That was a very grim prospect for people. The most frightening thing was a statement made by Trump. He said "I have a solution for homelessness. All Nancy Pelosi has to do is ask nice." Was he talking about camps like the ones the illegals were placed in? He is talking about decreasing federal money for affordable housing. That statistics show that a measure like that would put 37,000 of the lowest-income people are at risk of eviction in California alone. Article on his ideas here.

I have no idea what is to be done.

How are things around you?

Footnote: It all began back when Ronald Reagan was president. To have a president that does not believe in mental illness and had no insight as to what the end of the Vietnam war was going to mean was devastating to those people living on the margins. He was the one that came up with the catch phrases "double dipping" AND "homeless by choice". At the time veterans were denied a subsistence that let them live in a home when the administration did away government support for those people that were struggling.

Then when we had the collapse of our economy under GW Bush administration, people lost their homes, their job and their dignity. It was all gone. So many have never recovered or simply gave up.