Do You Think that News People and Government Leaders Should Have a College Degree? 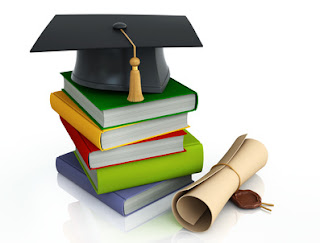 Note: A reader said that she did not get the point of this. So here is what I am getting at. We all can benefit from education however we get it. But when we listen to and are influenced by the news media and politicians, we need to be careful about who we follow.

I am such a pusher when it comes to education it is a problem sometimes. Being educated changes a person in so many ways I think....


But why? Does it earmark people as very smart and give them status? Maybe so. However, even an average person can excel in college and I think, many even come out with a more meaningful degree of knowledge and understanding. Studying does that.


Some of the best informed people are not educated formally. But they are well read and well rounded people. In the end education can come in many forms. Letting ones self be challenged in their beliefs is what counts.


But in service of our country as a Congressional Member, one expects an expanded knowledge that comes from a challenging and well rounded education. It is a big and important job.

I would expect the same thing of the news media that guides our information. These are the people that are having more and more influence on our view point so believing what they say should, I think, be based on their education and life experience. Just being able to talk fast or read is not enough.


The most poignant memory of college is a class I was required to take called Comparative Religions. That class taught the basic tenant of religions from throughout the world. I graduated from a small college in Oregon...Eastern Oregon University.

See, I had been raised in a very small community and the only show in town was our Methodist Church. We managed with a shared minister from nearby. One of our regular speakers was a Pentecostal minister that taught 8th grade in our local school. He was a lovely man and his daughter was my best friend. I played the piano for church services.

Had it not been for that college course that let me know that there are many religious beliefs and even Christian denominations I would have follow a very conservative path. I learned that all religions share the belief that people can be good.

But I can tell you the first day of class nearly brought me to my knees. I remember the professor coming outside to comfort me. He explained to me that he was not there to change my beliefs. He was there to educate me about the world.

It hasn't been until the last part of my life that I truly understood that opening ones eyes is what education is all about. Being thrown into the midst of people with different ideals is hard but necessary.

I suppose that people that attend a college of like minded people miss that opportunity. A religious college, for example, attracts people that have the same religious education. An unchallenged belief system leaves a person with a very narrow view.

Not finishing that education leaves your belief system unchallenged. It is the challenge that provides the breadth of knowledge that we need in a reasoned thinkers.

I am a "liberal" in the terms used to describe a political view today. I sometimes get sidetracked and forget that every issue, as I was taught, has many sides.

If I feel very strongly about something, that is the time that I need to educate myself on what is not seen or understood. The more strongly I react the less I know and understand. A knee jerk reaction does not make me proud of myself.

I am not a lawyer. It could be that all of those lawyer/congressmen have spent so much time arguing for issues they really don't believe in that they don't know right from wrong anymore. Those people are very educated. I realize that. But I watched Face the Nation this morning and listened to a senator evade answers and even the truth. He was slippery and deceptive. He was very "lawyerly". 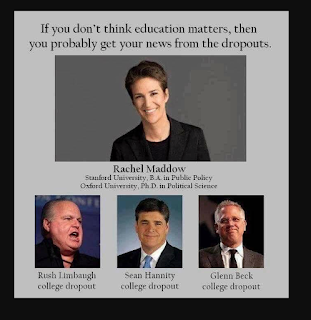 The news media is not perfect either but I would expect that the talk show hosts would have an education and be speaking from a basis of knowledge. People that are not well informed depend on them to be truthful. In a recent Facebook post I found this. I did check to see if it was correct. The three gentlemen at the bottom the page are Fox employees and have varying degrees of education but all three did not finish their degrees.


Lessons learned today tell me that even people that are educated have managed to discount all of the other voices as less than worthy of notice. So, in the end, education is not enough and never will be. There is so much more.

Statistics on Colleges US Representatives attended