Rules Worth Following: NO BEING CREEPY

In 2017 ago I wrote a post about rules from a Cranky Old Man blog. His take on the rules were just plain fun and interesting. The rule that I loved was so to the point and I have never forgotten it. It went like this:
I try to follow that rule everyday...and it is truly is hard sometimes.
But today's post is a little more serious. I want to talk about road blocks we put in our own path...ones that can in may cases make a bad time in our life even worse.
I was going through my Facebook page last night reading all those items I have shared over the last few months-words of wisdom from people wiser than myself yet actually could have come from my mouth.
The one that struck me was an idea about all the rules we abide by in our daily life...sort the laundry into several piles, sort the knives, forks and spoon before returning them to the drawer, sort the laundry again before returning them to the drawers, push in your chair when you leave the table and don't drop the baby.
Most of these rules, except the one about dropping the baby, are just suggestions. If you have ever looked up and found your world in shambles to the point that you feel worthless, you will know what I mean. Rules can do that. 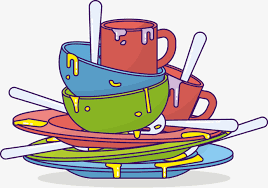 In the Facebook post taken from Quora, the lady that wrote  was very depress and actually could not do her work because the rules were just too much. So the dishes sat molding in the sink. Her house began to smell. It all seemed so insignificant that she hesitated to share her increasing depression with her therapist because...who care about dishes? Other people were in a lot worse shape over really big stuff so dishes were simply not important.
After much urging she finally talked about her problem. She hated to prewash the dishes before them went in the an old not working very good dishwasher...it went like this:

I began to tell him that you’re not supposed to, but he stopped me.

“Why the hell aren’t you supposed to? If you don’t want to scrub the dishes and your dishwasher sucks, run it twice. Run it three times, who cares?! Rules do not exist.”

Rules do not exist! I think the therapist is a genius...washing the dishes before washing the dishes does not need to happen. And adding a cycle or two was not really important if that is what you need to do to get through the day. It is o.k.
Most rules are not written on a big tablet and handed down from the mount. Most of them are more guidelines that can be erased or skirted around.
So the thought for the day is "Getting it done might be more important that how you are getting it done!" The rules be hanged.
S-o-o-o-o...what rules did you break today?
b+
I have written several posts on "Rules". I like this one:

No Urinating on the Golf Course