Is this the eye of God?
Nobody loves a good urban legend more than I do...they set me off on a search for the truth and that is a good thing. My latest urban legend quest started this morning when I received an email about "The Eye of God". This urban legend has been circulating since 2003 when the image of Helix Nebula, described by astronomers as "a trillion-mile-long tunnel of glowing gases" was originally published by NASA.
The email went like this (I did not edit the email):

This photo is a very rare one, taken by NASA.  This kind of event occurs once in 3000 years.  This photo has done miracles in many lives.  Make a wish. you have looked at the eye of God. Surely you will see the changes in your life within a day!!!  Whether you believe it or not, don't keep this e-mail with you. Pass this at least to 7 persons.  This is a picture NASA took with the Hubbell telescope...Called 'The Eye of God.'   Too awesome to delete.   It is worth sharing.

The truth is that only three years later the image of another nebula was published by NASA and reproduced on the Fox website.  Fox said, "The Hubble Space Telescope's legendary Wide Field and Planetary Camera 2 has produced one of its last images, a gorgeous shot of a planetary nebula." The camera that took this images was replaced shortly after this image was taken.  Space ship Atlantis visited the Hubble Telescope to complete the task.  Now I think that is inspiring! 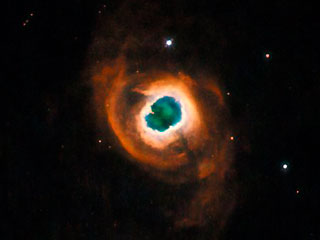 This email contained a beautiful thought and I would never doubt that people will gain comfort from such an image.  I, on the other hand, found the information about the image and all the others taken by Hubble astounding.  I find the talents man has received, used and prospered from inspiring.  But then I am funny that way.