She Liked it inside that Womb

My granddaughter did have her baby...after 25 hours in labor. I tell you what, this little person did not want to leave the warm comfort afforded to her for nine months (going on three years) inside her mama's womb.

Labor began early Friday morning and lasted until the next day. There was a lot of serious drama and I asked the future grandmother to keep me in the loop. Sometime early Saturday morning night she sent me this text...be sure to notice the emoji at the end: 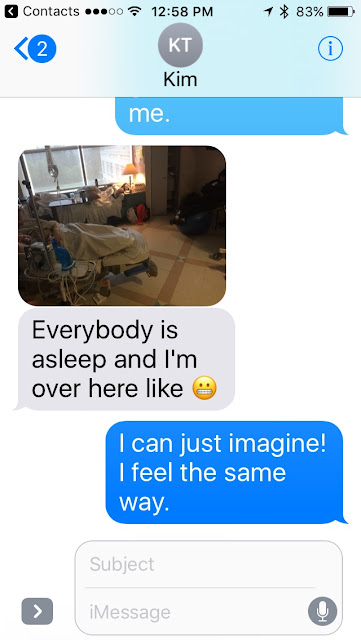 She had just told me that the exhausted mom and dad were sleeping for a bit. She, on the other hand, was an anxious mess waiting on the other side of the room.
The baby was not taken until several hours later. When they decided to do a cesarean, it was less than 15 minutes until she was born.  Everyone, including Grandma and Grandpa, are doing fine. The baby is beautiful.
We are all smitten to say the least. You can now call me Great Grandmother Barbara and my husband is GGpa. How cool is that.
Embry is now at home with mom and dad.
b+
at October 13, 2016