The Oregonian posted their funniest cartoon today. Todays favorite was one from Non Sequitur. It features a group of people gathered around a grave with a tombstone that says simply "I've Got This". 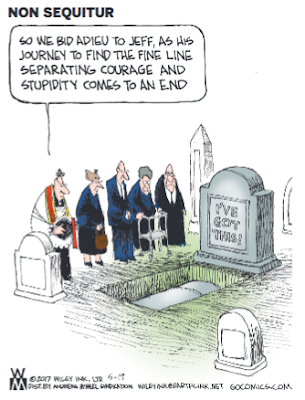 We have all walked up a path we knew nothing about. In the search for for a solution to a problem put before us, we have volunteer blithely. We put on a smug smile. After all we are sure that "We've got this". Then we journey to the brink.
Jeff in the cartoon above set out to find out how far one had to gone before a task turned from one demanding courage into the one that was just plain stupid. Jeff died in the quest. His tombstone tells it all. It is funny but it is also a little sad.
Boy do we have to be careful when we put ourselves into the line of fire with "I've got this!" because "not having it" can be a very bad thing.
The one that I have used many times before is "how hard could it be?". I remember heading out to see a cousin. He and his wife lived in a small community of about 900 people. I didn't have his address but I thought "how hard can it be?" Surely the gas station guy would know where Dale and Renee lived. Well, believe me, it was a lot harder than I thought it would be.
I said the same thing when we added a porch to our park model, when we added an Arizona room to the same structure, when we poured concrete (many time) and the list goes on. My husband runs and hides when I say "How hard could it be?".
I think Trump thought the same thing about being the President of the United States. After all, being President can't be complicated..."How hard can it be?" he thought. Then before long we heard him say "This is a lot harder than I thought it would be". I know how he feels.
I have learned that going on a quest without a plan is not a good plan and I should never say "how hard could it be?"
It is Friday and it is just a thought! What do you think?
at May 19, 2017