Hiding Your Light Under a Basket...Good Trouble is Good

Hiding Your Light Under a Basket...I wrote this post earlier this summer. It was all about standing for something and giving up the notion that we need to be invisible in order to live in our neighborhood or in our circle of friends. I had decided that enough was enough. If those round me could not accept what I believed, that was a problem they would have to deal with. 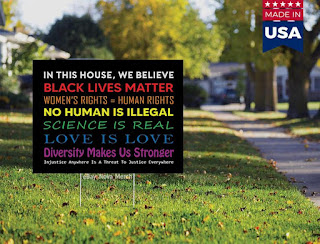 So...I bought a sign! One of my neighbors had one that I admired. She ordered it for me and I paid $10. The sign was printed on both sides so if I put it in my front yard, people could see it both coming and going. It was intentionally designed.

When our's arrived, we put it up on the wall in the entry part of the outside of our house. You could not see it from the street because, well, I may not be as brave as I want to be. My husband and I agreed that we just wanted people that came into our home to understand what we were all about. We did not want to influence or offend other people.

Can you guess what happened next? If you are part of a HOA you will know exactly. We were one of three couples that embraced the idea. As a result all three of us were asked to removed the sign that said:

IN THIS HOUSE, WE BELIEVE

As you can imagine we were not a happy neighborhood for a few days. The camps divided up into for or against. THEN a meeting was called for everyone in the neighbor and we gathered in our gazebo area. There was a very large crowd and those of us that were sent the letter spoke to the group. It was not a matter of changing any thing. It was just a matter of having our say. Nothing much changed and we all agreed that no signs would go up.

Here's the thing that is really sad...we have always had signs up. When Easter came around, those that were church attenders put signs up given them by their church. Season's greetings were posted on almost every house. It appears that now that is not going to happen because of that sign that we posted. I am still confused and sad. Had I just continued to hide my light under a basket everything would be just fine.

It is the power of words that are the most fearsome. All of the statements in the sign could be interpreted in several ways. For example, I do believe that we have to stop systemic racism if we are ever to live in peace...black, brown, eye shape, belief systems matter. Women's rights do not necessarily lead straight to abortion nor is love is love totally about lesbian/gay choices. But, the idea is there and people in a 55+ neighborhood are not ready to embrace the concepts let alone let people like me express them.

So, we took down our sign and in a letter to the board we expressed a desire to be treated with respect even though we do no stay in step with the rest. We all learned that a sign is not a sign and nothing more. It carries a message. We just won't do that anymore...none of us.

As for my basket and my light...we are doing fine. A new day is coming tomorrow and the day after. Hopefully, during 2020 we have all learned that freedom is very fragile and even though we may get in trouble, the good trouble John Lewis wrote about, we are right to stand up. As he said, freedom is an act not a state of mind. I am glad we did what we did.

Has anyone else put up one of these signs?